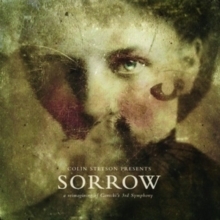 Colin Stetson is an American saxophonist and multireedist who has collaborated with an number of influential indie rock acts such as Arcade Fire, Bon Iver and Bell Orchestre. This new release 'SORROW', led by Stetson, is a reimagining of Henryk Górecki's most famous piece, performed by a 12-piece band including Arcade Fire's Sarah Neufeld, Saltland's Rebecca Foon, Greg Fox of Liturgy, Megan Stetson and more and recorded in 2015 in Brooklyn, New York.

"We all have those moments when we experience a piece of music that transforms us, and this was one of those moments for me," says Stetson. "Over the years, I went on to listen to this record countless times, always determined to absorb every instance of it, to know it throughout and fully. And this dedication to a thorough knowledge of the piece eventually gave way to a need to perform it."

"The concept was simple, and true to the original score. I haven't changed existing notation, but rather have worked with altering instrumentation, utilizing a group consisting heavily of woodwinds, synthesizers, and electric guitars...

The arrangement draws heavily from the world of black metal, early electronic music, and from my own body of solo saxophone music. The result is an intact rendition of Henryk Górecki's 3rd Symphony, though one which has been filtered through the lens of my particular musical aesthetic and experience.