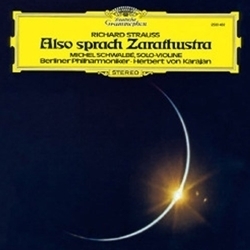 Kubrick’s 2001 A Space Odyssey prompted a flourish of LPs excerpting the timpani and organ pedal opening of Also Sprach... One wonders how many non-Straussians would stomach the whole Nietzschean epic! In fact, Karajan’s Decca version was used for the film. This one is from 1973, his first of two Berlin remakes (both engineered by Günter Hermanns), and perhaps the most satisfying. With close balances, the rich-textured sound rivalled the audiophile 1962 Reiner/RCA.

However, Speakers Corner has made a remarkable recut, raising the level and eliminating some obvious compression which marred DG’s own 1974 LP.

Herbert von Karajan conducts the Berlin Philharmonic, featuring violinist Michel Schwalbe performing Strauss's Also sprach Zarathustra. "What a surprise for his contemporaries when, following the brilliant tour de force of "Til Eulenspiegel", Richard Strauss decided to write a "Zarathustra" tone poem! A piece of programme music after Friedrich Nietzsche? The poet-philosopher's most celebrated work as a symphonic self-revelation? While Strauss, at that time court conductor in Munich, was still working on "Also sprach Zarathustra" ("freely after Nietzsche") voices critical of the project began to make themselves heard on all sides.

Did not even Nietzche's friend Peter Gast protest vigorously? Nevertheless the association of ideas between Zarathustra and music was undoubtedly in the air. Nietzsche had in fact written to the same Gast a decade earlier: "To what category does this "Zarathustra" really belong? I almost believe it belongs among symphonies." - from liner notes Musicians: Michel Schwalbe, violin Berlin Philharmonic Herbert von Karajan, conductor Selections: