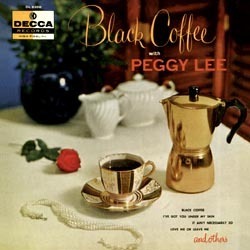 Black Coffee is another fine reissue from the AS team at Universal Music, delivering high quality reissues that look and sound better than the originals with high quality mastering off original tapes, deluxe expanded gatefold design and restored high quality cover artwork. What more can you ask for? Grab a copy while you can! - AudiophileREVIEW

She would never forget her apprenticeship years with Benny Goodman, said Peggy Lee in the Fifties. And indeed she has no need to do so! Anyone who has learned swing from the 'King of Swing', or survived being on tour for more than two years, and then worked hard to appear at America’s top show-business venues has deserved the highest recognition and praise. The musical scene provided a further niche for the talents of the blonde from Jamestown, North Dakota who never once regretted having left her provincial nest for the bright lights and glamour of Hollywood: the pawning of a wristwatch to get there was her best investment!
The twelve songs on the present DECCA LP, recorded 1953 and 1956, are either adaptations of blues numbers or are taken from the Great American Songbook and here Peggy Lee’s immense vocal flexibility and the wonderful quality of her soft timbre are more than evident. This particularly holds true for the slow numbers in which she proves to be a true master of the role of a diva: ballads are sung huskily and gently while Cole Porter’s and Richard Rodger’s musical hits swing along with verve.
All in all, this LP is a real gem – and not just for fans of vocal jazz and swing, but also for lovers of Broadway melodies. What is more, the recording quality of American DECCA is, again, astonishingly good.
Encouraged by longtime Decca A&R Milt Gabler, she hired a small group including trumpeter Pete Candoli and pianist Jimmy Rowles (two of her favorite sidemen) to record an after-hours jazz project similar in intent and execution to Lee Wiley's 'Manhattan project' of 1950, Night in Manhattan. While the title-track opener of Black Coffee soon separated itself from the LP - to be taught forever after during the first period of any Torch Song 101 class - the album doesn't keep to its concept very long; Lee is soon enough in a bouncy mood for 'I've Got You Under My Skin' and very affectionate on 'Easy Living.' (If there's a concept at work here, it's the vagaries of love.) Listeners should look instead to 'It Ain't Necessarily So' or 'Gee, Baby, Ain't I Good to You?' for more examples of Lee's quintessentially slow-burn sultriness. Aside from occasionally straying off-concept, however, Black Coffee is an excellent record, spotlighting Lee's ability to shine with every type of group and in any context.
Musicians
Peggy Lee vocals
Cootie Chesterfield trumpet
Jimmy Rowles piano
Max Wayne bass
Ed Shaughnessy drums
Selections
Side One:
Black Coffee
I've Got You Under My Skin
Easy Living
My Heart Belongs To Daddy
It Ain't Necessarily So
Gee Baby, Ain't I Good To You
Side Two:
A Woman Alone With The Blues
I Didn't Know What Time It Was
(Ah, The Apple Trees) When The World Was Young
Love Me Or Leave Me
You're My Thrill
There's A Small Hotel