Mitski - Be the Cowboy - LP 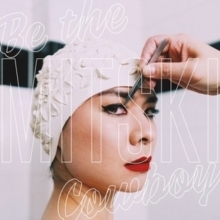 Hailed as the new vanguard of indie rock following the breakout success of 2016’s Puberty 2, Mitski returns with Be The Cowboy via Dead Oceans.
Mitski’s carefully crafted songs have often been portrayed as emotionally raw, overflowing confessionals from a fevered chosen girl, but in her fifth album, Mitski introduces a persona who has been teased before but never so fully present until now—a woman in control. “For this new record, I experimented in narrative and fiction,” comments Mitski. Though she hesitates to go so far as to say she created full-on characters, she reveals she had in mind “a very controlled icy repressed woman who is starting to unravel. Because women have so little power and showing emotion is seen as weakness, this ‘character’ clings to any amount of control she can get. Still, there is something very primordial in her that is trying to find a way to get out.”

Throughout the 14 songs, the music swerves from the cheerful to the plaintive. Mournful piano ballads lead into deceptively uptempo songs. “I had been on the road for a long time, which is so isolating, and had to run my own business at the same time. A lot of this record was me not having any feelings, being completely spent but then trying to rally myself and wake up and get back to Mitski.”

1 Geyser
2 Why Didn't You Stop Me?
3 Old Friend
4 A Pearl
5 Lonesome Love
6 Remember My Name
7 Me and My Husband
8 Come Into the Water
9 Nobody
10 Pink in the Night
11 Horse Named Cold Air
12 ashing Machine Heart
13Blue Light
14Two Slow Dancers