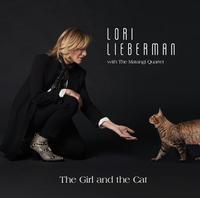 That listen made clear that both the performance and recording were special.Sound 10/10 Music 10/10 Michael Fremer Analogue Planet

"It was amazing!!! First and foremost, was the Lori Lieberman concert at Carnegie Hall. Lori, for those of you who are not familiar, is an amazing singer/songwriter, somewhat in the tradition of Laura Nyro. One famous song of hers that I'm sure you are familiar with is 'Killing Me Softly.' Lori has just released a fantastic new album, The Girl and the Cat, on which she performs with the Matangi String Quartet, who also accompanied her at the Carnegie Hall concert. To say she was and is fantastic is simply a dramatic understatement. She delivers a song, and most were her compositions, with feeling, grace, sincerity and beauty, which is unmatched. The audience, which included many members of the New York Audio mafia, were simply blown away by her performance, as was I. So intense was the feeling of some songs that they literally brought tears to my eyes, and I am sure that I was not the only one. Pick up her new album. You will be thrilled as well to discover, one of the great American songstresses of our day." — Sandy Gross, GoldenEar

Lori Lieberman has been a household name associated with "Killing Me Softly" as the inspiration and collaborator of the song and the original artist. Her beautiful vocals have touched the heart and soul of many of us.

For her 17th album, The Girl and The Cat, Lieberman teams up with the renown Matangi Quartet from the Netherlands. Included in this stellar 13-song album is Don McLean's "Empty Chairs," the song that inspired Lieberman to write the poem for the classic, "Killing Me Softly." The Girl and The Cat is viewed as a kind of classical crossover. There are sweeping sections within the songs to allow the string quartet to soar.

Lieberman plays all the piano parts as well as the acoustic guitar, and for this album, she has not only composed the songs, but has orchestrated the string arrangements along with LA based cellist, Stefanie Fife. The songs maintain their Lieberman stamp of heartfelt emotion. Journalist Leo Blokhuis has said of the CD, "It reminds me of my most cherished Juliet Letters by Elvis Costello and the Brodsky Quartet. Stunning."