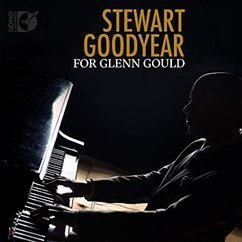 On a Sunday afternoon in January of 1955, 23-year-old Glenn Gould played his U.S. debut recital at the Phillips Collection in Washington, DC. This highly idiosyncratic program included music by Gibbons (Lord Salisbury’s Pavan), Sweelinck (Fantasia in D), Bach (five Sinfonias and the Partita No. 5), and Berg (Piano Sonata) as well as the Webern Variations and Beethoven’s E Major Sonata, Op. 109. Stewart Goodyear performed this exact program at the Phillips museum in 2016 and recorded most of it, substituting for the Beethoven and Webern pieces two Brahms Intermezzi and, to close poignantly, the “Aria” from the Goldberg Variations. Goodyear doesn’t attempt to mimic Gould’s style but demonstrates the same sort of technical assurance and clarifying intelligence. The Bach is brisk and crisp and the ornamentation with the Gibbons piece is tightly coiled. The Brahms selections are robustly songful. If the concept and execution of this release aren’t appealing enough, Goodyear’s program was engineered by Daniel Shores at the Sono Luminus studios in Boyce, Virginia, the source of some of the finest piano recordings on earth.Sound 5/5 Music 5/5 The Absolute Sound