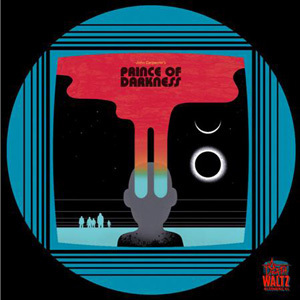 Re-mastered by Alan Howarth Exclusively For This Vinyl Release!

Prince of Darkness is a 1987 horror film directed, written, and scored by John Carpenter. The film is the second installment in what Carpenter calls his "Apocalypse Trilogy", which began with The Thing (1982) and concludes with In the Mouth of Madness (1995). A sinister secret has been kept in the basement of an abandoned Los Angeles church for many years. With the death of a priest belonging to a mysterious sect, another priest opens the door to the basement and discovers a vat containing a green liquid.

The priest contacts a group of physics graduate students to investigate it. Unfortunately, they discover that the liquid contains the essence of Satan himself, and they also discover that he will release HIS father - an all-powerful Anti-God! The liquid later comes to life itself, turning some of the students into zombies as the Devil comes forward to release his father. Will these students be able to stop him? He is Hollywood's most renowned sci-fi/horror filmmaker.

But director John Carpenter is also one of Hollywood's most talented film composers. The son of a Western Kentucky University music professor, he has composed the dramatic scores for sixteen of his nineteen previous film productions, often performing them as well on digital instruments. Prince of Darkness is undoubtedly one of John Carpenters darkest and most underrated films and the score complements the images perfectly. This has to be one of the most understated, atmospheric and downright scary soundtracks ever made.

Side 1: 1. Opening Titles 2. Team Assembly 3. Darkness Begins 4. A Message From The Future 5. Hell Breaks Loose Side 2: 1. Mirror Image 2. The Devil Awakens 3. Through The Mirror