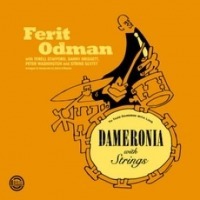 Numbered, Limited Edition of Only 1000 Copies

"Too expensive to record to analog tape" we often hear from major label representatives, from producers and from artists. And there are those who don't think the sonics are better or as good as ProTools. So here comes veteran Turkish drummer Ferit Odman with a self-produced album dedicated to bop-era arranger, composer, performer Tadd Dameron featuring, in addition to a trio of excellent musicians, a string section, all recorded to 2" analog tape, mixed to analog tape, mastered from tape by Ryan K. Smith at Sterling Sound and pressed at Pallas. ... this superbly recorded and played Dameron tribute features Terrell Stafford on trumpet, Danny Grisett on piano, Peter Washington on bass and Odman on drums. ... This is an album of elegant, melodic tunes filled with great beauty that will make you feel good from the first note of 'On a Misty Night' to the second side ender, after which you will wish there was more. Anchored by Odman’s smooth, subtle drumming the album also swings dynamically with rhythmic propulsion." — Music = 10/11; Sound = 10/11 — Michael Fremer, AnalogPlanet.

The album was recorded onto analog tape and the vinyl mastering from the tapes took place at Sterling Sound in New York. Audophiles have been waiting in line for the vinyl which is pressed in Germany by Pallas and is limited to 1,000 copies. Dameronia with Strings, released by Equinox Music, is a very detailed work that offers jazz lovers clean and natural analog sound. The perfect design and illustrations on the album are created by Japanese artist Takao Fujioka.