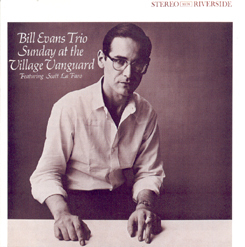 Sunday at the Village Vanguard is the initial volume of a mammoth recording session by the Bill Evans Trio, from June 25, 1961 at New York's Village Vanguard documenting Evans' first trio with bassist Scott LaFaro and drummer Paul Motian. Its companion volume is Waltz for Debby. This trio is still widely regarded as his finest, largely because of the symbiotic interplay between its members. Tragically, LaFaro was killed in an automobile accident ten days after this session was recorded, and Evans assembled the two packages a few months afterward. While "Waltz for Debby" -- in retrospect -- is seemingly a showcase for Evans' brilliant, subtle, and wide-ranging pianism, this volume becomes an homage, largely, to the genius and contribution of LaFaro