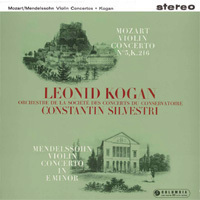 Leonid Kogan plays Mozart Violin Concerto No.3 & Mendelssohn Violin Concerto23 July 2019 by Electric Recording Co.
This release represents the last instalment of the six major stereo recordings that Leonid Kogan completed for Columbia Records . Although originally released in Mono only in the UK (Columbia 33CX 1744), in 1960 it was granted a commercial release in Stereo form (SAXF138) exclusively in the territory of France.

Mozart wrote only six concertos for the violin, five of these were all written within a year period during 1775 in Salzburg.  Mozart was just 19 at the time. This, the third concerto is perhaps the most popular of all Mozart’s violin concertos, with sophisticated, folk song inspired melodies that are more demanding of technique from the soloist.

Mendelssohn’s Violin Concerto was conceived in 1838.  It took almost seven years to compete and was finally premiered in 1845 in Leipzig.  Resolutely set in the romantic era, it contained many strikingly innovative elements that set it apart from other works of the period. It still remains one of the most popular violin concertos to this day, which is true testament to the quality and influence of this remarkable work.

Born in Dnepropetrovsk, Ukraine, on November 14, 1924, Kogan initially studied under Philip Yampolsky and then later under Abram Yampolsky, the former being a pupil of the famous Hungarian Jewish violinist, Leopold Auer. These solid foundations provided the platform for Kogan to further develop and explore his own style of playing – based on a clinical style of execution and technique. Kogan died on December 17, 1982 of a heart attack. At the time he was travelling by train between Moscow and Yaroslavl where he was due to give a performance with his son. He was 58 years old.

"Mozart's violin concertos are to a large extent a reflection of the taste of the aristocratic society of his age. They are music which makes its foremost appeal by the elegance and supreme fluency of the writing and addresses itself to a cultivated sensibility but touches only very rarely - in contrast to his mature piano concertos - the deeper strings of emotion." - from liner notes
"Mendelssohn's Violin Concerto justly reckons among the prized possessions of every violinist's repertoire. Together with the violin concertos of Beethoven and Brahms, it forms the great triad among nineteenth century works for solo violin and orchestra. True, it does not aspire to the classical grandeur of the Beethoven concerto nor does it show the symphonic elaboration of Brahms' but it possesses a most alluring charm and lyrical grace of its own. Through its first two movements there runs a vein of gentle melancholy as characteristic of Mendelssohn's genius - Wagner read into this an expression of his Jewishness - as is the elfin lightness and glitter of the Finale. Besides, every bar of the solo part proclaims the truly violinistic nature of its conception." - from liner notes
Mozart wrote 27 piano concertos but only six for the violin. This discrepancy in numbers is to be explained by the fact that his favorite instrument was the piano on which he was indeed one of the great virtuosos of his time while the solo violin held only a limited and temporary attraction for him. The first five violin concertos were composed in Salzburg in 1775 when Mozart was a boy of 19, and the sixth followed two years later after which his interest in the genre ceased. The precise occasions for which he wrote them is unknown - possibly for his own use, but, more probably, for Gaetano Brunetti who was the leader of the Salzburg court orchestra.
Musicians:
Leonid Kogan, violin
Paris Conservatoire Orchestra
Constantin Silvestri, conductor
Selections:
Side One:
Wolfgang Amadeus Mozart (1756-1791)
Violin Concerto No. 3 in G, K.216
1. First Movement: Allegro - Cadenza - Tempo I
2. Second Movement: Adagio - Cadenza - Tempo I
3. Third Movement: Rondo (Allegro-Andante-Allegretto-Tempo I)
Side Two:
Felix Mendelssohn-Bartholdy (1809-1847)
Violin Concerto in E minor, Op. 64
1. First Movement: Allegro molto appassionato - Cadenza - Tempo I - Presto
2. Second Movement: Andante
3. Third Movement: Allegretto non troppo - Allegro molto vivace
Browse this category: CLASSICAL
Contact information
Mozart & Mendelssohn - Violin Concertos : Leonid Kogan : Constantin Silvestri - 180g LP - SCOTT NANGLE AUDIO
T&C's and Privacy Policy