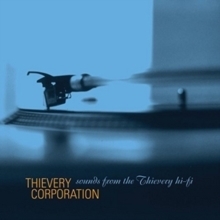 When Rob Garza and Eric Hilton fused downtempo, dub, and latin on Sounds From The Thievery Hi-Fi everyone wanted a piece. This sound was all over the place in the late 90's and early 00's - especially in the lounges and hot box sessions - and Thievery Corporation had it on lock. Proper double vinyl reissue complete with gatefold sleeve. Our vintage lab review: DC represent. Back in high school we used to hit up this club called the Vault. That and Tracks down in SE used to be our hangouts.

Anyway, I ran into one of these guys back then at the Vault and he handed me a card with the name and number. I was like what the fuck is the Thievery Corporation ? It was a question that bugged me until junior year of college, when my friend Mars let me borrow "2001 Spliff Odyssey" (ESL 001). And there it was: Thievery Corporation. Side comment, never let your friends borrow records, you'll never it got it back. Well in NY, Thievery records got in mad demand, kids running around trying to find the shit cause the dubbed out beats had a fresh original sound that boomed in lounges. Luckily I got doubles of 001 + 002. Now they're bigger and getting into different sounds