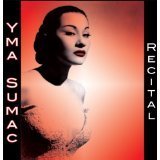 With the release of Voice of the Xtabay in 1950, people all over the world were astounded by one of the most unusual voices to emerge on the musical scene: Peruvian singer Yma Sumac, who glides effortlessly from contralto to coloratura, her voice covering a range of no less than four octaves!

The voice of Yma Sumac is indeed a miracle of nature. However, if that were all she was, the public's interest would not have gone beyond mere curiosity. What has made the singer's abilities so striking is the fact that she has managed to use the immense vocal resources at her disposal, resolutely striving for genuine artistry.

In June, 2006, Yma was honored by Peru's highest tribute, the Order del Sol (Order of the Sun) medal. To Recieve the award, and many others including the Key to the City of Lima, she visted Peru, where she created a reawakening of her music in South America. She was recieved warmly by fans of all ages. We hope, in our own small way, to also honor her with this release of a rare moment in musical history!

Recorded live in 1961, Bucharest, Romania.
Produced by Don Pierson, SunVirgin.com, for ESP-Disk'
Released under license from Electrecord
Layout and Design by Carl Glatzel
Press Quotes
"The great sound allows one to hear all the nuances of Sumac's performance from her whispers to growls to flights of high-pitched fancy. Her voice is simply amazing. "Goomba Boomba" and "Amor Indio" are uptempo highlights with swinging orchestral accompaniment. "Cueca Chilena" and "Ccori Canastitay" are female duets with Cholita Rivera accompanied by just Vivanco on guitar. But it's on the moody "Chuncho" that Sumac pulls out all the stops, making unreal sounds and even getting some echo added to her voice to excellent effect. Yma Sumac may still be seen by some as kitsch, but the fact is that she was an amazing vocal talent the likes of which has not been seen since. Listeners who know her real value will be delighted with this excellent live date." - Sean Westergaard
Track Listing
1. Fuego Sobre Los Andes Vivianco
7:30
2. Ataypura Vivianco
3:19
3. Montana Mama Vivianco
4:01
4. Amor Indio (Indian Love Song) Traditional
3:00
5. Serenata India (Indian Serenade) Vivianco
2:18
6. Supay Taki (Enchanted Flute) Vivianco
3:23
7. Goomba Boomba Vivianco
3:46
8. Llama Caravana (Llama Caravan) Traditional
2:16
9. Cueca Chilena Vivianco
3:22
10.
Ccori Canastitay
2:35
11. Wambra Vivianco
3:10
12. Taita Inti (Hymn to the Sun) Vivianco
5:50
13. Marinera Traditional
3:12
14. Chuncho (Forest Creatures) Vivianco
6:45
Browse these categories as well: ROCK & POPULAR, CLASSICAL
Contact information
Yma Sumac - Recital - 180g LP - SCOTT NANGLE AUDIO
T&C's and Privacy Policy