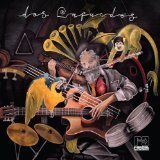 Ten years percolating, distilling and honing a musical identity firmly rooted in the canon of sonic experimentation and hybridization, this album is far more than a mere collage of disparate genres competing for the listener’s attention. Instead, a procession of musical movements flowing through the raw energy of ska and punk, the ferocious musicality of jazz and fusion, the cultural traditions of samba and folk, the rhythmic underpinnings of funk and metal culminates in a listening experience akin to a psychedelic opera of Brazilian proportions, a beating heart tale of the manic circadian rhythms of life.