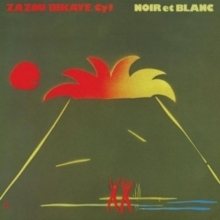 At last, the vinyl reissue of one of the biggest cult albums in the history of Crammed Discs. This record is constantly being (re)discovered by generations of fans, musicians and DJs, who hail it as an unsurpassed Afro/electronic milestone.

This reissue was remastered from original analogue tapes. It includes a booklet with new notes by the participants, as well as 5 of the recently-unearthed original demos, which have never been released previously, and 3 original remixes from 1984

Now ripened for rediscovery by a new generation of clued up selectors, the timeless qualities of Noir Et Blanc clearly resonate as strong as ever with the modern scene, sounding at times uncannily close to TV on the Radio clashing Congotronics, and just as likely to be played by Vladimir Ivkovic as Jon K or ATFA’s Brian Shimkovitz.

Basically one of those records that forms the square root of everything right now, and loved by those in the know.