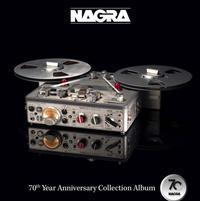 Nagra is on a course to become a major force in the world of vinyl. Having just launched their first-ever turntable - the "statement" level, Reference Anniversary turntable/tonearm system - they now follow with the production of The Nagra 70th Anniversary 45rpm double vinyl album. Mastered at 2xHD on Nagra equipment and cut at famed Bernie Grundman Mastering, the set is pure analog from analog master tapes. The LPs feature tracks from Bill Evans, Louis Armstrong, Monty Alexander and Buddy Tate along with some amazing audiophile tracks recorded on the legendary Nagra IV-S tape machine.

"We have just received the acetate test records. To say that they are stunning is an understatement." - Nagra