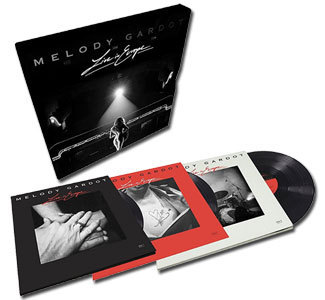 After several albums Melody Gardot is celebrating the international tour success of her career so far by bringing us her first ever album of live recorded music. "Live in Europe" presents live versions of her greatest hits recorded at concerts worldwide between 2012 and 2016. An album personally curated by Melody herself, hits include Baby I'm A Fool, My One and Only Thrill, Les Etoiles, and March For Mingus.

"I dreamed to have a live album since many years ago. Something that would be a dedication to the people who welcomed us all over the world. At first, I had wanted to seek out the 'best of' in a way that would illustrate the most perfect performances from our concerts over the last few years. I struggled listening to over 300 shows, judging, analysing and critiquing every solo, every note, every phrase… it was painstaking until finally I reached a breaking point… I heard a song that made me cry - not because of the performance itself, but because of the memory of the feeling of that evening… and then suddenly, I remembered the point of all of this… why this album exists as it does is simply down to the ‘feeling’, the nostalgia, the memory - it’s not about perfection or ego or demonstration - it’s just about what happens live - because live there is only one element that counts: heart. This album holds my heart, and the love of all the people who supported us along the way. It is as much a gift to me, for the memories it holds, as it is my gift to you, the listener. This album is simply a very long thank you to all of you. I am forever grateful." - Melody Gardot