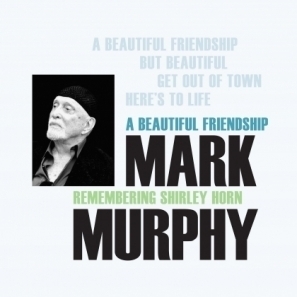 For those who prefer their jazz on vinyl, the redoubtable UK-based Gearbox label - famed for their attention to detail in regard to vinyl mastering - leads the way.

A Beautiful Friendship:Remembering Shirley Horn (★★★★ Gearbox) is a sensational new vinyl EP by octogenarian jazz singer Mark Murphy, whose resonant, wonderfully expressive voice has lost none of its potency.

Finally we must pay homage to one of the most beloved living fathers of modern vocal jazz, Mark Murphy, as he releases A Beautiful Friendship: Remembering Shirley Horn (Gearbox) - on vinyl! Turntable or download format, you will find a true master. Murphy opens his heart with nothing held back. It is clear that jazz is the lifeblood running through his veins.   It’s a man, it’s an instrument, it’s…a male jazz vocalist! Just a typical day in Metropolis.

Legendary jazz singer and scat exponent Mark Murphy, now in his 82nd year, has released a 4 track vinyl EP in memory of Shirley Horn, however, the recording is just as much in memory of his long time accompanist George Mesterhazy. I was lucky to see them perform together at Morley College on the 30th January 2012, sadly George died quite unexpectedly in his sleep only a few months later on April 12th of natural causes - he had just turned 59. A protégé of Horn, it was he who originally suggested they record a tribute to her and although naturally consumed by grief, Mark was determined to complete the project.

This quintet of Alex Minasian on piano, Curtis Lundy on double bass, Steve Williams on drums and Till Brönner on trumpet have recorded in an easy going, classic style. Mark employs his swooping phrasing and tone with near the knuckle, precarious syncopation to all songs. The swinging opener A Beautiful Friendship (D. Kahn/S.H. Styne) exercises a liquid quality between the ensemble who give each other room to breathe. They follow traditional song form and solo exchange in all tracks. Murphy excels in a ballad and But Beautiful (Jimmy Van Heusen/Johnny Burke) is just that - his indulgent yet focussed emotional style comes to the fore as does Till’s delicately melodic horn. Get Out Of Town (Cole Porter) returns us to an upbeat groove. It features a sinister Bond-like chromatic through-line as well as prominent percussion, verging on a tango or march, but releasing occasionally into swing.

The final track is the piano duo Here’s to Life (Artie Bulter/Phylis Molinary) and I am certain Mark is thinking about George especially during this number “who knows what tomorrow brings, or takes away…” Alex must be conscious of the boots he has to fill and keeps things simple - as my accompanist the late John China used to say “it’s all in the spaces”… Murphy is of course best seen live and I was greatly moved by his duo set with George Mesterhazy. I am only happy I was able to exchange a few words of admiration for his playing. The relationship between a singer and accompanist is really an intimate one - they have to share your mood and anticipate with sensitivity your direction in a song. It is a chemistry that cannot be bluffed and does not necessarily improve with practice – you need to ‘connect’. This EP is a warming tribute to two influential musicians with personal contributions from all involved (Willliams was Shirley’s drummer of 25 years and Lundy also a close friend.) Mark is of course the fulcrum; a contemporary of Horn’s who was abashed to be complimented by her “I thought I was good, and then I heard you!” I’m sure he didn’t expect George to go first but this record perfectly honours their Beautiful Friendship.