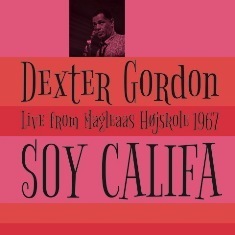 This is a 1967 Danish TV performance that has never released on vinyl before. Dexter Gordon is heard at his best and most powerful on these three tracks of the hardest bop, the swingingest Afro-inspired music and the most tender of ballads recorded on a hot Summer’s day at Magleaas High School in front of an audience of young musicians with ‘the best rhythm section in Europe’ - pianist Kenny Drew, the 21 year-old double bassist Niels-Henning Ørsted Petersen and drummer Albert 'Tootie' Heath.
Recorded in Denmark Soy Califa: Live from Magleaas Højskole 1967 is to be released, the London label indicates, at the end of March. The title track ‘Soy Califa’ featured in a separate version with a different quartet five years earlier on the 1962 Blue Note album A Swingin’ Affair, and here Gordon (27 February 1923-25 April 1990) on this little known session is captured instead with pianist Kenny Drew, bassist Niels-Henning Ørsted Pedersen, and drummer Albert ‘Tootie’ Heath, the only surviving member. This same quartet had a little earlier in the summer of 1967 also recorded elsewhere in Denmark at the Jazzhus Montmartre in Copenhagen captured on Black Lion albums that include The Montmartre Collection, Vols 1 & 2.
On Soy Califa... besides the latinate title track where Long Tall Dexter intones the words ‘Soy Califa’ at the beginning, the release features Johnny Mandel's ‘The Shadow Of Your Smile’ a song that featured a few years earlier in the film The Sandpiper, and a 12 minute-plus cut called ‘The Blues Up And Down’. None of these tracks have been commercially released on vinyl or CD, according to Gearbox, but appeared on a DVD of the concert which is long deleted, the label says.
Tracklisting
Side One:
Soy Califa (7:46)
The Shadow Of Your Smile (9:19)
Side Two:
The Blues Up And Down (12:11)
In House  Mastering on Vintage & Modern All Analogue Valve Mastering
Haeco Scully lathe, Western Electric cutting amps and head; Maselec master control, EQ and de-esser; original Lang Pultec EQ; Urei high and low pass filters; fully restored Studer C37 and ex Decca Philips Pro51 tape machines; Nagra SN stereo reel to reel for field recording; Telefunken U73b compressor/limiter; Telefunken V72 and V76 mic preamps; Audionote 211 valve monitoring amps, speakers and turntable
Browse this category: JAZZ
Contact information
Dexter Gordon - Soy Califa : Live from Magleaas High School 1967 - 180g LP - SCOTT NANGLE AUDIO
T&C's and Privacy Policy