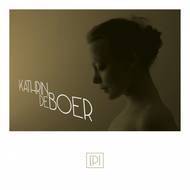 Belleruche singer goes solo with a 4-part series of 10inch vinyl EPs,
recorded and released by analogue vinyl-only record label, GearboxRecords.
The former Belleruche singer goes solo with the first release in a 4-part series of 10inch vinyl EPs. EP1 was recorded direct to stereo tape with no overdubbing, mixing or editing. The record features a more poetic approach to deBoer's songwriting than in previous projects, with the pared back arrangements giving her remarkable voice space to roam
In 2013, ‘handmade hip-hop-blues/soul’ group Belleruche decided to call ita day, the close-knit trio making the decision to pursue individualcreative and personal avenues after eight hardworking, exhilarating and
globetrotting years and 4 critically acclaimed albums on Brighton’sTru-Thoughts label.
Following the amicable split, lead singer Kathrin deBoer, already atalented multi-instrumentalist, decided to pick up the bass guitar. Shewas the beneficiary of an old Fender P Frankenstein bass called Annie and
in under a year, with a little tuition from punk rocker friends, she setout on her first solo live gigs armed with a plethora of new material.
Backed by a drummer and viola player, deBoer performed to spellboundcrowds at London’s Jazz Café and The Elgin in Camden, and it was here thatLondon’s foremost vinyl-only label Gearbox Records came calling.
With a commitment to put the ritual back in to music listening, Gearboxhas hitherto focused on releasing extremely high quality and previouslyunreleased vinyl cuts, however as soon as he heard deBoer’s work Darrel
Sheinman, owner of Gearbox Records, decided to sign Kathrin. "I firstworked with Kathrin on a recent Max Cooper project we did, and her exoticvoice, which has such perfect pitch, blew me away. When I heard she was
going solo, I put my hat in the ring to give her the Gearbox treatment,and hey presto, she has decided to come along on the journey. We are goingto have fun!”
Based in Kings Cross’ Tileyard studios complex, which also plays host toMark Ronson, Sub Focus and more, Gearbox records live in a completelyanalogue environment, from studio to tape, then tape direct to vinyl. This
approach suited deBoer perfectly - her solo work is an altogether morepoetic approach to songwriting than in previous projects, and the paredback arrangements give her remarkable voice space to roam. Says deBoer,
“As an artist you have the luxury and responsibility to be truthful toyourself, to the melody, the rhythm and the songs story, I try to find andweave a silver lining in each song. Recording and mixing in one take takes
skill from everyone involved beyond the musicians, it’s exciting, you haveto think fast, flow, perform and accept the 'imperfections' and think ofthe music as a whole, accept the moment, the recordings don't lie!”
The 4 tracks across EP1, the first of a series of 10” Vinyl releases forthe Gearbox label, see deBoer explore topics such as the blurred linesbetween friends and lovers (‘Something Said’) or being the pawn in someone
else’s mind games (‘Not For Me’). Though these are not songs of love asseen through the rose-tinted naïveté of an old romantic, deBoer presentsthe complexities of human relationship with all its flaws, something she
was keen to reflect in the recording process: “To lose ones individuality,the small faults, essentially the humanness in the recording phase, to beedited to 'perfection' leaves me a bit cold.”
The decision to release on vinyl was also a relatively simple one fordeBoer: "Multitracking, compression, buckets of production has lead tosome great albums but the downside in its wake is the homogenization of
sound and music production. It sounds better, vinyl sounds better, andanalogue is better. That’s all really, that’s why we do it."For Gearbox, this signing marks a new chapter in their repertoire. It isthe first time they have worked with an artist whose career developmentfits closely with the label’s own frontline vision to take on artists with
roots in jazz/soul and mix in an eclectic range of influences forsomething entirely unique.
Kathrin deBoer - Knitbone
Kathrin deBoer - Something Said
Kathrin deBoer - Folly
Kathrin deBoer - Not For Me
In House  Mastering on Vintage & Modern All Analogue Valve Mastering
Haeco Scully lathe, Western Electric cutting amps and head; Maselec master control, EQ and de-esser; original Lang Pultec EQ; Urei high and low pass filters; fully restored Studer C37 and ex Decca Philips Pro51 tape machines; Nagra SN stereo reel to reel for field recording; Telefunken U73b compressor/limiter; Telefunken V72 and V76 mic preamps; Audionote 211 valve monitoring amps, speakers and turntable
Browse this category: ROCK & POPULAR
Contact information
Kathrin deBoer - EP1 - 10" EP - SCOTT NANGLE AUDIO
T&C's and Privacy Policy