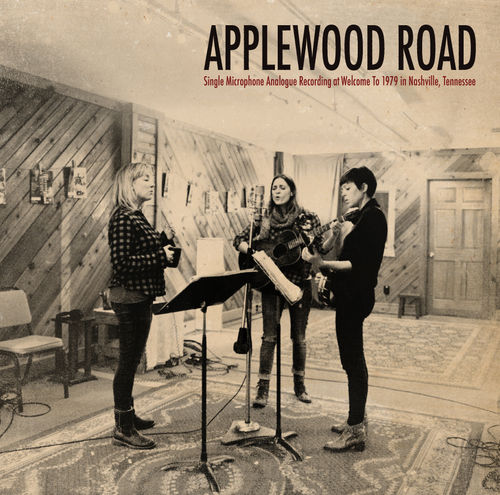 this is an album of surprises, evoking traditional country without trying to replicate it, in memorable
songs and haunting harmonies that stay with you. Larry Nager The Absolute Sound Top 10 Records of 2016

Each song was recorded live to stereo tape, Emily, Amber and Amy singing together around one microphone with minimal accompaniment - the whole concept going right back to the beginning of recorded music. The tape was then mastered and cut for vinyl at Gearbox Records in London, keeping the 100% analogue chain throughout the whole process

A flawless set, that has to be the most haunting release of the past year. The original lyrics and melodies here, recorded around a single microphone, are unfailingly seductive and wistful; the vocal harmonies and the spartan accompaniment are exquisitely laid-back." The Sunday Times

In September 2014, three songwriters met for the first time in a cafe in East Nashville. By the next morning they had put the finishing touches to their first song, ʻApplewood Roadʼ, which they recorded live to tape at Nashvilleʼs all analogue studio, Welcome to 1979.
The songʼs nostalgic air, along with the clear, sparse arrangement of three vocals accompanied by double bass, drew immediate positive response, and they decided to expand the idea into a full album.

Six months later, they reconvened to write, rehearse and record songs for the self-titled album Applewood Road. The songs were again performed live around a single microphone at Welcome to 1979 and recorded to 2-track tape with minimal accompaniment from some of Nashvilleʼs finest session players, including Telisha Williams, Aaron Lee Tasjan, Josh Day, Fats Kaplin, and Jabe Beyer.