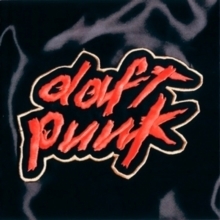 Originally issued in 1997, Homework is the landmark debut album from the French house duo Daft Punk consisting of Guy-Manuel de Homem-Christo and Thomas Bangalter. Generally regarded as one of the most influential dance music albums of the '90s, Homework features an innovative synthesis of techno, house, acid house and electro styles amidst tracks that consistently engage the listener with rhythmically ambitious peaks and valleys.

Includes the acclaimed hit singles "Around the World" and "Da Funk" which were both nominated for Grammy Awards for Best Dance Recording. A rewarding and impressive early glimpse at a group who has subsequently become the biggest electronic act in the world!