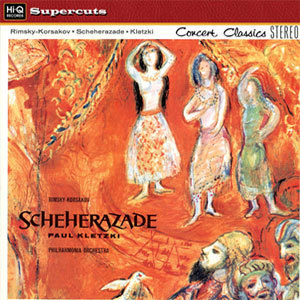 Hi-Q Records is a label that stands for the Highest in Quality Audiophile Recordings! These Classical LPs have been faithfully reproduced from the Original Analogue EMI Master Tapes, Cut at Abbey Road Studios, Pressed on the original EMI presses at The Vinyl Factory in Hayes, England and feature all original album artwork and packaging!
Cut at Abbey Road Studios from the original stereo analogue master tapes with the Neumann VMS82 lathe fed an analogue pre-cut signal from a specially adapted Studer A80 tape deck with additional 'advance' playback head, making the cut a totally analogue process.

Records that are financial bargains are either reissues of somewhat old material that are admirably played but in faded recorded sound or new records by artists whose names hold out little promise of an exciting performance. But when you are offered a new record of Scheherazade, played by the Philharmonia Orchestra and conducted by a conductor, Kletzki, who is very likely to do this sort of thing well, then you can hope for a cheap record that is a bargain in the best sense of the word.

And that is what this record is.” So began the GRAMOPHONE review for what was in 1960 a new budget label designed to compete with the emergence of record clubs offering cheap records by mail order. Unlike Decca’s Ace of Clubs, HMV Concert Classics offered mainstream repertoire, often newly recorded and in stereo. In the original December 1960 review of the stereo release Thomas Hearns of the GRAMOPHONE summed up his comments above with: “...a thoroughly good performance and very well recorded...”

The artistry of Paul Kletzki and the Philharmonia can also be heard in the vintage stereo recording of Sibelius’s Second Symphony on HIQLP026. Features: • Hi-Q Records Supercuts 180g Vinyl • Cut from the Original Analogue EMI Master Tapes at Abbey Road Studios! • Superior Audiophile Pressing • Features Original Album Artwork • This recording is not otherwise generally available in any format.

1. The Sea and Sinbad's Ship

2. The Tale of the Kalendar Prince

. The Festival of Baghdad; The Sea; The Ship goes to pieces on a Rock surmounted by a Bronze Warrior

Recorded on April 12-14, 1960 at No. 1 Studio, Abbey Road, London. Produced by the legendary Victor Olof and engineered by Douglas Larter. 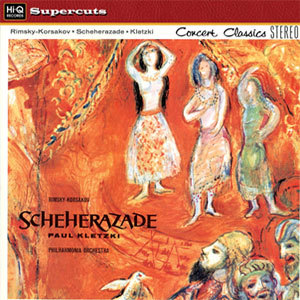