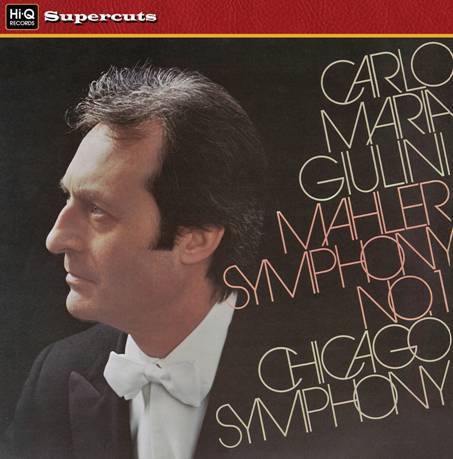 Carlo Maria Giulini (1914-2005) made his American debut with the Chicago Symphony Orchestra as far back as 1955 but he was appointed Principal Guest Conductor in 1969, an appointment very much instigated by the Music Director of the CSO, Sir Georg Solti, who needed someone to share conducting duties whilst Solti was still running the Royal Opera House, Covent Garden. Giulini made several magnificent recordings with the CSO for EMI during this period, including another Grammy Award-winning recording: the Brahms Violin Concerto with Itzhak Perlman, available on HIQLP033.

Recorded on 30 March 1971 at the Medinah Temple, Chicago,  with producer Christopher Bishop and engineer Carson Taylor.

Pressed on 180g vinyl to audiophile standards using the original EMI presses by The Vinyl Factory in Hayes, England.

In the original August 1971 review in the GRAMOPHONE Edward Greenfield remarked:

§  “If you want a Mahler First above all for beauty of tone and phrasing and precision of ensemble, then this is a plain first choice. In addition Giulini’s qualities suit this work. For all the orchestral sophistication, he has a transparent honesty which accords well with Mahler in ‘Wayfaring Lad’ mood. Nor does he use the Chicago orchestra’s virtuosity to whip up excitement in fast tempi... Giulini’s, sumptuously beautiful all through and never merely slick and over-polished, is certainly one to add to the list of top recommendations, not least for the gorgeousness of the recorded sound... which is even richer than in the three finely-recorded rivals which I list [Solti, Kubelik and Horenstein].”

Mahler: Symphony No.1 in D