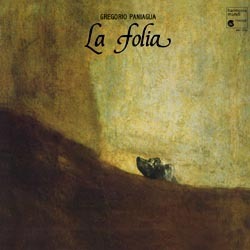 Album of the month - "Quickly becoming a cult LP when issued in 1980, this brilliantly inventive set of twelve variations on the 16th-century Portuguese theme 'La Folia'…There are forays into jazz, hoedown, Indian sitar music, and even a quote from Mancini's Pink Panther! The cherry on the icing is to have it back on pristine vinyl again." Recording = 5/5; Performance = 5/5 – Chris Breunig, Hi-Fi News

Gregorio Paniagua and his original-instrument ensemble present a bizarre program based on the ancient tune known as the 'Spanish Follies' and intended to illustrate the 'folly' or madness that has been said to tinge Spanish culture. Mad it is, with a vengeance. Among the original instruments sounding off here are automobiles, pistols and birds." - The Absolute Sound

Arthur Salvatore's review . This record excels in every sonic parameter, and it is full of surprises. The sound stage is large and the sound-floor is extremely low, allowing every last detail to be heard; including the harmonic structure and decay, tonal and dynamic complexity etc.
This recording is a lot of fun. You will want to use it for a demonstration record! 5/5 Sound

Atrium Musicae de Madrid directed by Gregorio Paniagua performing his own La Folia de la Spagna. "All the composers in the world who write their own Folia don’t keep a close account of what they are doing.

They mature patiently like the tree that does not haste his sap; they soak up everything and remain confident in the torments of spring, without anxiety that they might not know another spring. And spring comes and a quiet weariness overcomes them, even if they are patient, carefree and calm, as if all eternity lay before them. They can then love their Folia and their solitude; they endure the pain it causes them and succeed in investing the sound of their complaint with beauty." - Gregorio Paniagua

"Gregorio Paniagua and his original-instrument ensemble present a bizarre program based on the ancient tune known as the 'Spanish Follies' and intended to illustrate the 'folly' or madness that has been said to tinge Spanish culture. Mad it is, with a vengeance. Among the original instruments sounding off here are automobiles, pistols and birds." - The Absolute Sound.

The vast majority of music on this disc is serious and superbly played on a huge diversity of period flutes, percussions and strings but folia it is - unexpected, completely out-of-place music that will surprise you throughout the performance. As I mentioned in the introduction, this recording has earned serious audiophile recognition ever since its release and now the re-edition by Speakers Corner. The reason is that this performance was captured at the peak of Hyperion’s expertise in analog recording which is easily heard. The tonal diversity, instrumental textures, imaging and ambiance cues are of the highest mark, pretty much unlike any other recording I know of even compared to some of the earlier Harmonia Mundi oeuvre which until now was my absolute reference. La Folia goes even further technically, a firework that will tell you everything that is right—or wrong—with your system. 6Moons 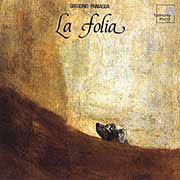