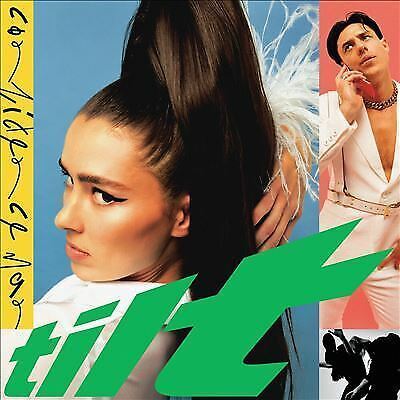 In this world, nothing is certain except taxes, death and Confidence Man. They are unstoppable, unquenchable, undeniable, and if you get in their way, you’re gonna get hurt. Not even a global pandemic could stop Janet, Sugar, Reggie and Clarence from producing an album so fierce, flirty and full of anthems that you might need to sit down before you hit play.

Welcome to Tilt, Confidence Man’s second album on Heavenly Recordings. Confidence Man’s debut, Confident Music For Confident People, was one of the joys of 2018, laced with savage lyrics and rapturous melodies; a north star of euphoria in an increasingly joyless world. Since then they’ve teased us with the occasional dance-floor snack, but with their follow up album Tilt they are finally serving us the main meal.

“We’ve been trying for the most epic, hands up, euphoric anthem for a while and this is the first time we’ve come close… Turns out it’s pretty difficult, but nothing’s too hard for con man.”

A1 Woman
A2 Feels Like A Different Thing
A3 What I Like
A4 Toy Boy
A5 Luvin U Is Easy
A6 Holiday
B7 Trumpet Song
B8 Angry Girl
B9 Push It Up
B10 Kiss N Tell
B11 Break It Bought It
B12 Relieve The Pressure
Browse these categories as well: ELECTRONICA, ROCK & POPULAR
Contact information
Confidence Man - Tilt - LP - SCOTT NANGLE AUDIO
T&C's and Privacy Policy