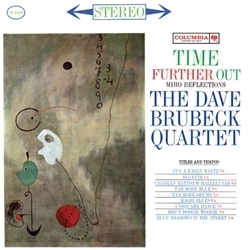 WAITING A REPRESS - TEMP OUT OF STOCK - BACK IN STOCK SOON

This is the connoisseur's way to hear it. mark mickelson - the Audiobeat

The album is an absolute delight that keeps surprising as it unfolds " and the Mingus-like human percussion heard in "Unsquare Dance." Impex's reissue is excellent... Great stuff." - Wayne Garcia, The Absolute Sound

TAS Rated 4/5 Sonics Sonics in the January 2011 Issue of The Absolute Sound!

Featured in Michael Fremer's Heavy Rotation in the November 2010 Issue of Stereophile!

"A great follow-up then and an even greater first for IMPEX. Any self respecting Brubeck fan should own a copy; this reissue is a no brainer, even if you were never aware of the recordʼs existence in first place. Highly recommended!" - Danny Kaey, Hi Fi Statement

"Time Further Out was re-releases by Impex Records and they did a phenomenal job. The sound is FANTASTIC and the music is even better. This, the third-or-so in the time signature series captures the band at a really swinging groove. And Joe Morello's drums. WOW." - Jim Kaplan, Record Collector

1961 Benchmark is a Strong Sequel to 1959's Time Out Mastered from the Original Analog Tapes at Sterling Sound by George Marino Pressed on 180g LP at RTI:

Splendid Sonics! Time Further Out continues the Dave Brubeck Quartet's exploration of unusual time signatures that began on the ensemble's definitive 1959 album Time Out. Accompanied by an all-star cast, the esteemed pianist arranging tunes according to the number of beats per bar, in the process rewriting rhythmic rules and dance steps.

Like the original Time Out album, Time Further Out's cover features a work of modern art: a painting by Spanish artist Joan Miro. Mastered from the original analog tape by George Marino at Sterling Sounds in New York and pressed at RTI in Camarillo, California, this record has never sounded so alive or immediate.

Impex Records is the fruits of labor from the team that founded Cisco Music, which was responsible for a large catalog of reissues in the 1990s and into the 2000s. Perhaps it's my imagination, but I hear similarities between Time Further Out and earlier Cisco releases, including generous liquidity and fullness, though not at the cost of obscuring fine detail. While some vinyl reissues can sound perfunctory, as though they were remastered by a robot, Cisco releases exhibit a particular perspective on the music that always seems uniquely human. Here, this translates to a colorful panorama that emphasizes the wholeness of the Quartet over its individual parts. While Desmond's sax and Brubeck's piano are well captured, the rhythmic underpinning of Joe Morello's drums and Eugene Wright's bass keep the musical train on the tracks. The RTI pressing is as expected -- flat and very quiet. Pressing quality is higher today than ever (perhaps because there are few pressing plants), so it would be news if this weren't the case.

Six-eye and two-eye originals of Time Further Out are not difficult to find or expensive -- I have multiple copies in stereo and mono, a few of which I've bought for pocket change. None is as quiet or sounds as voluminous as this reissue. If you value the music, this is the connoisseur's way to hear it. - Mark mickelson - the Audiobeat

9. Blue Shadows In The Street 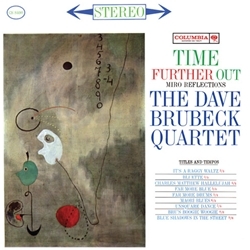