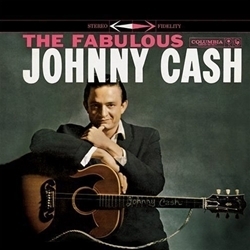 This IMPEX reissue absolutely crushes the original "6 Eye" edition—at least the copy I have. It's far more cleanly rendered, with less watery echo, probably added during the original mastering and not on the actual tape, though of course the fast reverb echo heard here obviously is part of the tape.

Overall, while the sonics don't compare to Bill Porter's Studio B work for RCA, they come enough to rate this a "near" sonic spectacular in terms of transparency. Cash's voice is "in the room" and that's enough! Music 8/10 Sound 9/10 Michael Fremmer  Analogue Planet

The Fabulous Johnny Cash is the third album from music legend Johnny Cash and first for Columbia Records after his departure from Sam Phillips' Sun Records. A strong set that features some of the best material he ever recorded for the label such as

"Don't Take Your Guns to Town," "Frankie's Man, Johnny," "Pickin' Time" and "The Troubador" among others.

“When Johnny Cash comes on the radio, no one changes the station. It’s a voice, a name with a soul that cuts across all boundaries and it’s a voice we all believe.

Yours is a voice that speaks for the saints and the sinners, it’s like branch water for the soul. Long may you sing out. Loud.” – Tom Waits

Cash's debut Columbia LP contained some of his strongest tunes post Sun Records, including the hits "Blue River" and "I Still Miss Someone" and the now classic "Don't Take Your Guns To Town." The sonics were smoother, more "studio," but his voice retained the immediacy and richness that gave his earlier recordings their gravitas and soul. Mastered by Kevin Gray, the cutting engineer who knows when to leave a good thing alone, this is early Johnny Cash the way you remember it - without the noisy, thin vinyl!

"When Johnny Cash comes on the radio, no one changes the station. It's a voice, a name with a soul that cuts across all boundaries and it's a voice we all believe. Yours is a voice that speaks for the saints and the sinners - It's like branch water for the soul. Long may you sing out. Loud." - Tom Waits

"This IMPEX reissue absolutely crushes the original "6 Eye" edition—at least the copy I have. It's far more cleanly rendered, with less watery echo...Cash's voice is "in the room" and that's enough!" - Michael Fremer, www.musicangle.com, Music 8/10, Sound 9/10

"Once again, the Impex crew has not only improved upon an original pressing, they've done it in an original way. The sound of this reissue is full and fully integrated, not parsed and scrubbed of its wholeness. Cash's voice is more booming, seemingly coming from deeper within his chest, the twangy reverb complementary instead of overwhelming...Johnny Cash's series of stripped-down albums with producer Rick Rubin are often the way younger listeners first encounter him, his voice far mellower and not as sure. He's in his prime on The Fabulous Johnny Cash, singing with all the power and grip of a young man, and his choice of material is astutely guided. If you think, as I do, that country music has seriously lost its way, this album will remind you just how it has gone off the track." - Marc Mickelson, theaudiobeat.com, 4/5 Music, 4/5 Sound!

7. I Still Miss Someone

8. Don't Take Your Guns to Town

11. Shepherd Of My Heart 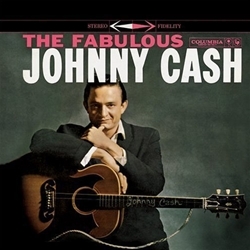