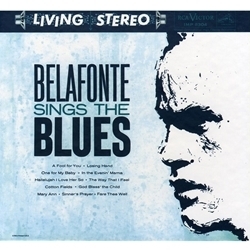 This album remains incredibly popular and well-respected for good reason aside from the spectacularly vidid sound. 10/10 Sound Michael Fremmer

A favorite off the recommended list by The Absolute Sound magazine

Impex's line of classic RCA Living Stereo releases now includes the inimitable vocal stylings of Harry Belafonte singing the timeless words and music of American blues in truly breathtaking sound. Available for the first time on 180g 45RPM 2LP, this definitve pressing was mastered by Kevin Gray, includes a historical essay insert and packaging, and is individually numbered and strictly limited to 2,000 pieces.

Belafonte Sings the Blues was recorded over four sessions during the first half of 1958, and released by RCA later that year. The album features thrilling performances of numerous Billie Holiday, Johnny Mercer, and Ray Charles songs, interpreted in a way that only Belafonte can. The blues are close to Belafonte's heart and it clearly shows here on his renditions of such classics as "One For My Baby", "Cotton Fields" and "God Bless the Child" among others! "

This reissue was mastered by Kevin Gray at Cohearant Audio and the 45 rpm set pressed at RTI in California. A few reissue companies have taken a stab at the RCA Living Stereo catalog, but this is the most successful execution yet. I was struck by how much more emotional impact this issue has. The two LPs are packaged in a handsome fold-out cover with lyrics inside the fold and an insert bio of Belafonte inside sleeve. Top recommendations!" - Dennis Davis, HiFi+ Magazine, January 2013

Harry Belafonte has never before sung on records as he does in this album. He is freer, more earthy, more exultantly identified with his material than ever before. He ha always communicated an often ferocious as well as lyrical sensitivity, but in this collection he achieves a unity of emotional strength in and understanding of his material that marks an important stage in his evolution as an artist.

"This is the area - the blues - with which I have the strongest identification," emphasizes Belafonte. It took a long time, however, before he was able to make this kind of a direct, basic blues album. By blues, incidentally, it is not meant that the songs are strict blues in terms of bar and chord structure, but that the feeling and the wryly unconquerable spirit of the blues pervade all the numbers.

"When I started singing," Belafonte explains, "I was involved with an enbironment that emphasized the modern school of jazz, and it was difficult for me to adapt the way I felt to the requirements of that kind of singing. But that was what I was exposed to at the time. I've always had a feeling for the basic blues, but it took several years of removing myself from the predominantly modern jazz environment and finding myself and my own set of balues before I had teh courage to attempt an album like this. Here I can just step out and sing wholly the way I feel."

Belafonte Sings the Blues was recorded over four sessions during the first half of 1958, and released by RCA later that year. The album features performances of numerous Billie Holiday, Johnny Mercer, and Ray Charles songs performed in a way that only Belafonte can.

The blues are close to Belafonte's heart and it shows in the way he delivers such tunes as "One For My Baby", "Cotton Fields" and "God Bless the Child" among others. 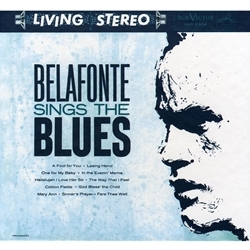