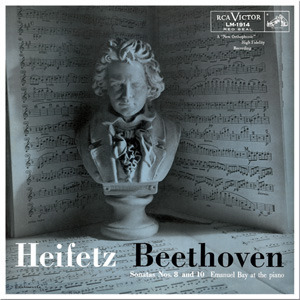 All Analogue  Mastered by Kevin Gray - Pressed at RTI

Pressed at RTI! Strictly Limited to 2,000 Pressings! For many classical music lovers, Beethoven’s eighth violin sonata lives in the long, fiery shadow of the ninth, better known as the “Kreutzer”. This is easy to understand, as the Kreutzer is a prime example of the stormy side of Beethoven — the one many listeners see as his most exciting and revealing trait.

However, just as his eighth symphony is the kinder, gentler companion to his towering, formidable ninth, the eighth violin sonata, shorter and less aggressive than the ninth, shows a more lyrical side of Beethoven. For this release, RCA coupled the eighth sonata with the tenth, also in G Major. One of the loveliest of Beethoven's compositions for violin, the mood of the tenth sonata is the perfect complement to the eighth.

Although RCA would often place Heifetz alongside great pianists like Rubinstein, it was with Emanuel Bay that he found the greatest chemistry.

This Impex LP is the long-overdue 180-gram debut of the famous Heifetz/Bay team.

The two sonatas were recorded on October 16 and 17, 1952 using a single microphone. These monaural masterpieces come closer to capturing the true Heifetz tone than many concerto recordings of the stereo era and Impex's all-analog production, featuring mastering by Kevin “Dr. Groove” Gray & Robert “Mr. Record” Pincus and pressing at Record Technology Inc., preserves the incredible dynamic range of this historic session, without the unnatural EQ of the original LP.

Strictly limited to 2,000 pressings, this is sure to become a great collectable reissue from Impex Records.

The one thing I have not yet discussed is the performances of the two sonatas on LM-1914. As mentioned at the start of this review how a person perceives the quality of a performance is highly dependent on the person's personal preferences. Of all of the violinists who have ever been recorded, Heifetz is without question the technical wizard. Nobody before or since has played the violin with such technical proficiency. The majority of his listeners over the years have been mesmerized by his playing. A small minority, of which I am one, find Heifetz's playing to be technically perfect, but a bit on the cool, unemotional side. I would much rather listen to Fritz Kreisler than Heifetz. Kreisler would play sloppily at times, but his ability to convey emotions and sweep his audience along with him was legendary. That being said, I actual enjoyed listening to the two sonatas on LM-1914. Heifetz is still the perfect technician. However, I found these performances to be slightly warmer and more emotional than the majority of his recordings that I have heard. This slightly warmer performance plus the wonderfully realistic sound make this LP a must buy not only for both Heifetz lovers and music lovers, but also for audiophiles Postive Feedback

I was well pleased by the sound, but even more so to hear a rarefied level of playing that might be extinct, though I hold out hope that the headlong rush to “play fast and hard” hasn’t wiped out musicianship from every corner. This is a must for music lovers and students, as well as audiophiles looking for something with meat on its bones. Dagogo

With only the faintest hint of 60-year-old master-tape noise, the recording is transparent and open with a sound that is modern, not archival, partly thanks to better vinyl. Surfaces were perfect, and it was a delight to hear the rich harmonics spilling off Heifetz’s violin. Kudos to mastering masters Kevin Gray and Robert Pincus for delivering better-than-the-original sound and likewise to the rest of the Imprex staff for recognizing this gem and taking the chance on a mono recording of chamber music - theAudiobest 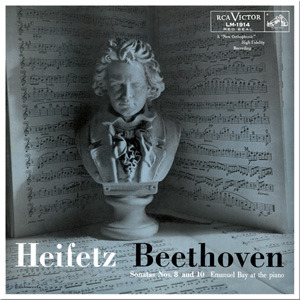