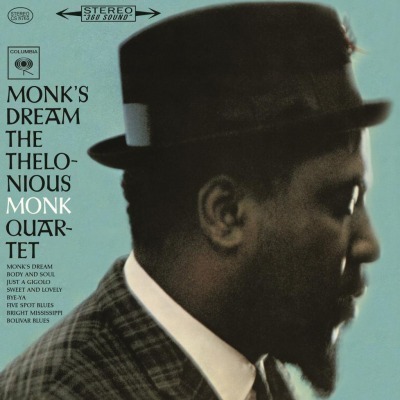 Mastered by Kevin Gray from the Original Master Tapes with Robert Pincus & Pressed at RTI!

A great reissue and very highly recommended... If you have no Monk albums, this would be a good place to start." - Michael Fremer,Analogplanet. Music 9/10, Sound 9/10!

The sound makes it a must-have for audiophiles. It’s another of the great Columbia jazz releases that take on a presence and tonal balance somewhere between the laid-back Verve sound of Val Valentin and the aggressiveness of van Gelder. The recording balance and technique are nearly perfect. The vinyl mastering in this reissue, as well as the vinyl pressing, is superb. Buy it before you lose your chance. Dogogo Review

Recorded at the tail end of 1962 and originally issued in 1963, Monk's Dream is Thelonious Monk's debut for Columbia Records after releases for Blue Note, Prestige and Riverside. Working with producer Teo Macero and featured in a quartet setting with Charlie Rouse (tenor sax), John Ore (bass), and Frankie Dunlop, (drums), Monk's Dream was the best selling LP of Monk's lifetime, ultimately contributing to his appearance on the cover of Time magazine in 1964.

The 8-song set features five Monk originals including the rhythmically complex "Five Spot Blues" and "Bolivar Blues," as well as a pair of solo sides sans accompaniment in "Just A Gigolo" and "Body and Soul." Although a majority of the tracks had been previously recorded in various live settings with different titles, this quartet is regarded by many as one of the best groups Monk was ever associated with and it is their studio interpretations of the material that remain the definitive versions and add up to one of Monk's signature albums!

HIiFi+ - 10 out of 10 for Recording & Music!!!
"The sound of this new issue is to die for and then some. Impex releases only a handful of LPs each year, but its track record for taste and great sound is unrivaled. Perfect in every way!" - Dennis Davis, HiFi+
"Monk's Dream is the Columbia Records debut release featuring the Thelonious Monk Quartet: Monk (piano), Charlie Rouse (tenor sax), John Ore (bass), and Frankie Dunlop (drums). Jazz scholars and enthusiasts alike also heralded this combo as the best Monk had been involved with for several years. Although he would perform and record supported by various other musicians, the tight -- almost telepathic -- dimensions that these four shared has rarely been equalled in any genre... Monk's Dream is recommended, with something for every degree of Monk enthusiast." - Lindsay Planer, Allmusic.com
"With only one horn out front to solo, we get a great double dose of Monk both as soloist and as a rhythm section player. Not that there was a hell of a lot of difference between the two in his playing, but it's wonderful to hear him briefly hanging in the back as an accompanist playing the changes and adding his angular spin on rhythm and melody as the horn player did the heavy lifting. Then he'd jump out front and you'd get these elliptical leads that twirled and jabbed, leapt and pushed... 'Monk's Dream' is the signature album by one of jazz's signature artist." - Spinner.com
"If this record doesn't get your feet tapping and your head nodding (and not as in "out"!) I'm not sure what would... The recording trades natural space for honest tonality and incredible immediacy and excellent dynamics. Where Monk solos on the standards he gets a big spread across the stage almost taken from his keyboard perspective... Here the transparency, immediacy and transient clarity surpass that of the original and without losing any of the original's more attractive qualities. The reissue is surely lower in distortion on the dynamic peaks and the blacker backgrounds heighten the instrumental relief... A great reissue and very highly recommended... If you have no Monk albums, this would be a good place to start." - Michael Fremer, www.analogplanet.com, Music 9/10, Sound 9/10!
"Produced by Teo Macero, Monk's Dream was the first LP for his new label, and would also become the best selling of Monk's career... The sound here, as compared to original mono and stereo pressings, is more dynamically nimble and present, as well as tonally somewhat cooler. But if the early LPs sound warmer, they also have a hooded coloration that floats over the sound, making them sound more homogenized, and not as lively as this fine Impex reissue." - Wayne Garcia, The Absolute Sound,

limited edition 180g vinyl of Impex Records mastered by Kevin Gray from the original master tapes with Robert Pincus and pressed at RTI.