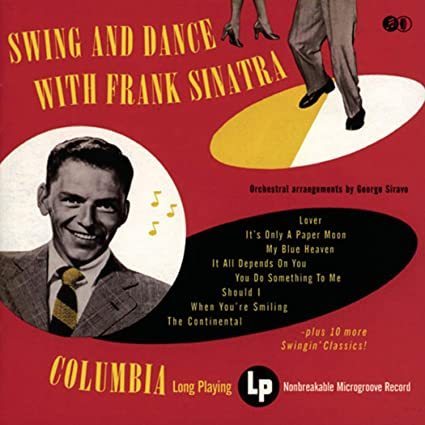 Includes Extra Track Not Found On The Vinyl Edition!

Rich in musical texture, this essential Sinatra classic - featuring the swing-style arrangements of George Siravo - marked a pivotal moment in 20th-Century pop music history, and represented the singer's transition from tender crooner to hip, swinging sophisticate. These performances offer a flawless snapshot of Sinatra's legendary musical craftsmanship as he reinvents himself for a new direction in his career - one that would hail his unparalleled success of the 1950s and '60s.

with a dazzling array of PREVIOUSLY UNRELEASED BONUS TRACKS including alternate takes, orchestra-only tracks and a revealing glimpse of Frank Sinatra in Columbia's famed 30th Street Studio (circa 1949), personally directing every facet of the recording session. This exquisite, high-fidelity session offers the most concise, in-depth illustration of Frank Sinatra working his magic in the studio, and functioning as his own producer.

The IMPEX team has spared no expense or effort in the creation of this milestone recording. In keeping with the prestigious label's reputation for meticulous sound,  has been transferred, restored and mastered in the analog domain from the original 15-ips session tapes: superior-sounding masters that have lain untouched in the Columbia Records vault for more than fifty years. These analog, monophonic tape masters sound spectacular, and shine as never before.

The Complete, Original 10-inch Album
Lover
It's Only A Paper Moon
My Blue Heaven
It All Depends On You
You Do Something To Me
Should I
The Continental
When You're Smiling (The Whole World Smiles With You)
Bonus Tracks, Alternate Takes & Sessions
Farewell, Farewell To Love ("Barbecue Riffs") [with Harry James & His Orch.]*
Deep Night (with Harry James & His Orch.)*
It's Only A Paper Moon (Alternate Vocal Take - Prev. Unissued)
You Do Something To Me (Orch. Only Take, False Starts + Vocal Alternate Take) [Prev. Unissued]
American Beauty Rose (Alternate Vocal Take - Prev. Unissued)
It All Depends On You (Session Recording [SHORT version - Prev. Unissued] + 'Test' Take)
(*) These recordings have been restored and remastered from a recently discovered, first-generation MASTER tape from the original sessions, and offer sound that is superior to all previous issues.

Please Note: Due to additional time afforded by the SACD/CD format, this version contains material not included on the 33-RPM vinyl edition.