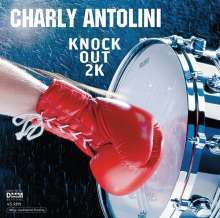 Warning: The playing of the record is at your own risk

In terms of sound, vinyl mastering has achieved what is feasible. Brian Gardner at the Bernie Grundman Mastering

It's show time! A powerful spectacle, explosive and funky awaits the vinyl fans. What fascinated the music world with the legendary direct cut in 1979 will be continued as a 45rpm cut - again with brutal kicks. Nobody should say you didn't warn.5/5 Vinyl

Charly Antolini's 1979 "Knock Out" is still a legend among audiophiles and percussionists. Within a short time, the direct recording of the Swiss drummer was out of print at that time, until today it is regarded as the ultimate test of any stereo system that holds something in itself. Twenty years later, in 1999, Antolini and his two comrades from that time, percussionist Nippy Noya and bassist Wolfgang Schmid, once again went to the studio together to record a successful sequel in time for the Millennium with "Knock Out 2K".

Why this was only released as a CD at that time is a mystery - now this drumsfest is finally available on vinyl with 45 rpm, and it is in no way inferior to the original legend, on the contrary. The drums come out loud in the boxes, warm the bass, silvery and clear the cymbals, Nippy Noya's incredibly huge percussion arsenal buzzes around like a flock of birds. In addition, one hears here that Antolini's tremendous jazz experience (from Herbolzheimer to Benny Goodman) bears fruit, because the grooves and dynamics of this disc are again a good corner more varied than its predecessor. A must for Vinyl fans!