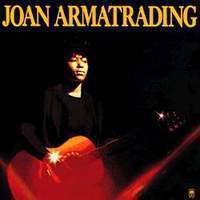 With original UK pressings of Joan Armatrading, it's hard to believe that a reissue could make any of them sound significantly better. But now that we have a basis of comparison with this new Intervention reissue, we can hear that there clearly was room for improvement, and the reissue is a significant sonic upgrade. Working from the best source available, a half-inch safety copy of the original stereo master tape, Kevin Gray at Cohearent Audio handled the remastering, after which the LP was pressed at RTI on 180-gram vinyl. The album art was restored by Intervention's Tom Vadakan, and Stoughton used that artwork for the film-laminated, tip-on gatefold jacket. The lyrics, originally printed on the inner sleeve, are now on the inside of the gatefold. The original LP had great sound, and there was never anything that stood out as needing attention. Yet, by comparison to this reissue, some slight defects are obvious. Kevin Gray’s fresh mastering has more of everything. Those Ovation guitars have more texture; Armatrading’s and the backup singers' vocals are more completely fleshed out; already impressive dynamics have an even greater impact; and every instrument is presented in a more tangible, three-dimensional space. This is among a handful of the best-recorded rock records in existence, and the expressive music means that you do not have to be embarrassed to show it off, or to use it to show off your hi-fi system. Intervention Records has restored many great titles, but none more deserving than this.5/5 Theaudiobeat

Joan Armatrading's 1976 self-titled classic on 180-gram vinyl
100% analog mastering from real analog tapes!
Mastered by Kevin Gray at CoHearent Audio
180-gram ultra-quiet vinyl pressed at RTI
Beautifully restored tip-on old style jacket printed by Stoughton Printing
"One of the finest talents I have ever had the good fortune to work with ..."  — Producer Glyn Johns
Intervention Records is thrilled to introduce another classic record in its (Re)Discover Series, Joan Armatrading. Produced and recorded by legend Glyn Johns, Joan Armatrading is the breakout record that saw Joan assume full command of her extraordinary talents and leap to the forefront of rock's greatest female stars. A soulful, soaring voice and a powerful and evocative songwriter, her smash hits include "Love and Affection," "Down To Zero," and "Somebody Who Loves You."
Joan Armatrading's 180-gram LP is 100% analog mastered by Kevin Gray at CoHEARent Audio from the best source available — phenomenal-sounding 1/2" safety copy of the original stereo master tape. The remastering is amazing! Thanks to Glyn Johns' recording and production work, Joan's vocals and guitar playing have never sounded so rich, resonant and dynamic. This is an audiophile demo disc all the way, with depth, realism and a breathing dimensionality.
The album art is beautifully restored by IR's Tom Vadakan and housed in a film-laminated, Old Style "Tip-On" single-gatefold jacket printed by Stoughton Printing.
Side 1
Down To Zero
Help Yourself
Water With The Wine
Love And Affection
Save Me
Side 2
Join The Boys
People
Somebody Who Loves You
Like Fire
Tall In The Saddle