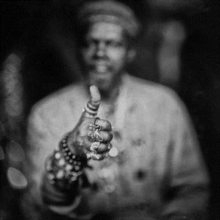 The expansive American experience Lonnie Holley quilts together across his astounding new album, MITH, is both multitudinous and finely detailed. Holley's self-taught piano improvisations and stream-of-consciousness lyrical approach have only gained purpose and power since he introduced the musical side of his art in 2012 with Just Before Music, followed by 2013's Keeping a Record of It. But whereas his previous material seemed to dwell in the Eternal-Internal, MITH lives very much in our world - the one of concrete and tears; of dirt and blood; of injustice and hope. Across these songs, in an impressionistic poetry all his own, Holley touches on Black Lives Matter ("I'm a Suspect"), Standing Rock ("Copying the Rock") and contemporary American politics ("I Woke Up in a Fucked-Up America").

1 I'm a Suspect
2 Back for Me
3 How Far Is Spaced-out?
4I  Snuck Off the Slave Ship
5I  Woke Up in a Fucked-up America
6 Copying the Rock
7 Coming Back (From the Distance Between the Spaces of Time)
8 There Was Always Water
9 Down in the Ghostness of Darkness
10 Sometimes I Wanna Dance