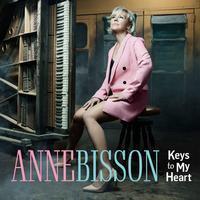 £99.99
Price includes VAT, plus delivery
Possible delivery methods: UK Tracked with Signature, Airmail Standard, UK Express, Airmail Tracked with Signature, UK Standard, Heavy Item
Hand-Numbered, Limited Edition 180g One-Step Plating 45rpm Double LP!
Mastered & Cut by Bernie Grundman!
Pressed at RTI!
Canadian Jazz Singer & Pianist Releases Her 6th Opus!
After a successful and diverse career of more than 20 years in almost every corner of the entertainment world, Anne Bisson returned to her first love, jazz, by releasing in 2009, Blue Mind, an album which brilliantly showcased her talents and musical creativity. Critics were unanimous, praising Anne Bisson as a natural jazz artist. With 35,000 albums in sales, she now releases a new album on which she is joined in the studio with two Los Angeles 'Jazz Giants', Joe LaBarbera on drums and Darek Oleskiewicz on acoustic bass.
This new album, Keys To My Heart, contains eleven songs. Two covers: "Killing Me Softly", a perennial standard, "For Me, Formidable", a beloved song from legendary French composer/singer Charles Aznavour, which Anne sings in both English and French, and nine new songs, co-written with Anne's frequent collaborator and friend, Pierre Lenoir. These songs create a unique world, Anne's world, where they tell involving stories with warm and expressive performances that confirm the tradition of artistry and high audio fidelity that Anne has been known for so many years.
Anne quickly realized that for the album to be fresh, and for her to feel totally at ease with the two musicians she would only meet on the morning of the first recording session, she had to place her trust once again in the hands of Michael C. Ross, with whom she had worked previously on her very successful Direct-to-Disc Four Seasons In Jazz album. Michael suggested she come down to Los Angeles to record at United Recording Studios in Hollywood, and that's what took place on May 16 and 17, 2019.
Michael Ross says: "Studio B at United Recording is my favorite room in the world! Their microphone selection is second to none. It includes Neumann M-50s, AKG C-12s and AKG C-12As, Telefunken 251s and Neumann U-67s and U-47s. Their console is one of the few of its kind, a custom-built Neve 8068, with API 550a EQs on every channel."
So be prepared to hear Anne Bisson's voice as you've never heard it before. Anne's writing and playing is beautifully enhanced by the other musicians, creating a spontaneous atmosphere where everyone was comfortable and it felt like they'd been playing together for ages.
Hand-Numbered, Limited Edition - 3000 Copies
Audiophile Quality 180g Vinyl
45rpm Double LP
One Step
Mastered and cut by Bernie Grundman
Pressed at RTI
2 color inserts with lyrics and additional information
Recorded at United Recording Studios, Hollywood, May 2019
Musicians
Anne Bisson piano, vocals
Darek Oleskiewicz acoustic bass
Joe LaBarbera drums
Selections
Side A:
Killing Me Softly
Icarus
In A Whisper
Side B:
No Problem
Where Am I Now
Hour Of The Wolf
Side C:
Hunger In Your Heart
Slip Into My Limousine
Climbing In The Clouds
Side D:
I'm Sorry (J'ai d'la peine)
For Me, Formidable