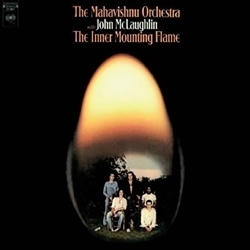 This was a fine recording, with excellent dynamics, full bodied deep bass, a particularlywell recorded drum kit and a satisfying three dimensional perspective.Speakers Corner’s 180g reissue is slightly thicker and richer sounding than the thin, bassshy original. A case could be made for either one being superior but ultimately I think the reissue wins for its improved bottom end, greater three-dimensionality and overallharmonic completeness. It even comes with a reproduction of the original’s insert. Like the sonic comparison, the reissue’s insert is thicker and more vibrant than the original. - Michael Fremmer

The Mahavishnu Orchestra's The Inner Mounting Flame burns from the very first note to the last and the wealth of ideas, sheer vitality and supreme soloistic virtuosity of the five top-notch musicians from four different countries is absolutely first class here. "Meeting Of The Spirit," "The Dance Of Maya" and "You Know You Know" are just a few of the highlights from this 1971 debut from the Mahavishnu Orchestra and it's still amazingly fresh and creative over 36 years later.

As British bands like Yes, ELP, and Genesis extended the borders of rock & roll, John McLaughlin had seized the opportunity to do the same with jazz. The first stars of the jazz/rock fusion camp, the Mahavishnu Orchestra played sellout concerts, sold records in quantities previously unheard of by jazz musicians, and captured a crossover audience of forward-looking jazz devotees and progressive rock fans.  The music on The Inner Mounting Flame is incendiary and highly improvisational. Well-conceived unison melodic passages structure each tune, and McLaughlin and company play like the virtuosos they are throughout. "The Noonward Race" features a bluesy, yet harmonically dissonant solo from McLaughlin, and the frenetic drumming of Billy Cobham. In contrast, in "A Lotus on Irish Streams," McLaughlin soars passionately on an acoustic guitar, while violinist Jerry Goodman adds a simple, folky melody.

Available once again on  Vinyl LP. - This is a classic recording that belongs in every rock and jazz collection 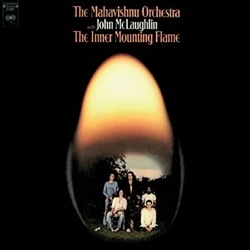