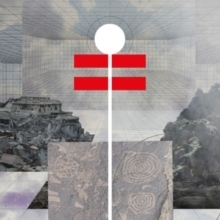 ondon-based Gum Takes Tooth's hyper-kinetic and unique approach evolved via drum-triggered electronics, manipulated to achieve a dynamic, rhythmically driven and flagrantly unclassifiable fury that flirts with both speaker-ripping psych-rock pyrotechnics and synapse-shredding acid house deliverance whilst stubbornly avoiding any of the trappings or clichés of either. Arrow - their third album and first for Rocket Recordings, is both a portrait of their home-city in an increasingly alienating age, and a travelogue for an everyday journey involving battles for both time and space - searing and visceral yet suffused by melancholy and elegiac atmosphere.

Mapping out a landscape in which the influences of Coil, Warp Records, The Knife and Lightning Bolt are alchemically transformed into an innovative and pulverising onslaught, Arrow is also the band's more intensely personal record yet, dealing as the band's Jussi Brightmore notes with 'Ever more omnipresent and vacuous global tropes cementing economic inequality, nervous amnesia and being as complicit as anyone else in all that' Yet there's plentiful hope for the future, and never more than on the album's title-track: The Arrow is so called because it flies in a straight line or arc but it never repeats its structure, or goes back on itself' - and thus, a singularly appropriate metaphor for Gum Takes Tooth themselves. Mavericks to the last, perpetual square-pegs and a band intent on forging onward to break all or any paradigms before them, creating a collection of kinetic anthems to battle everyday oppression - a work of machine-driven mania with its very human heart on its sleeve 'Forge an impressive tumult through linking up their hyper-kinetic drums to home-made technology, resulting in the entirely unhinged and brilliant sounds' The Quietus