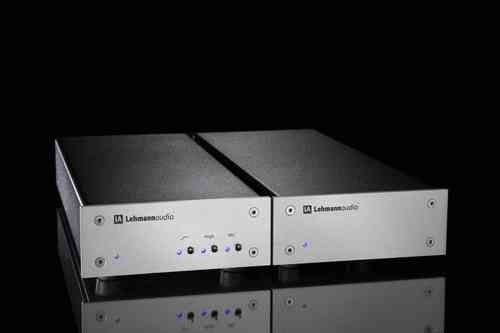 "When Lehmann Audio brings an "A" list phonostage like the Decade to the LP listening experience, the results explain the staying power of the analog medium. And the Decade does so without fanfare or a "watch this" level of fireworks. The Decade is also highly configurable, which should make the vast majority of cartridges feel welcome. Paired with its robust outboard PWX II power supply, the Decade offers a very low noise floor, quiet backgrounds, and big dynamics. But its overriding claim to fame is its uncanny sense of balance and musicality. It's highly articulate and responsive on top, and has the ability to place images just so on its expansive soundstage. Like its original Black Cube of years ago, Lehamm Audio's Decade reminds us all over again just how musically rewarding it is to be a devotee of vinyl playback." - The Absolute Sound 2015 Product Of The Year,

Considered on its own, the Lehmannaudio is easily the most impactful solid-state phono preamplifier I've ever experienced—and one of the most believably dynamic phono preamps of any type. A thoroughly impressive product. Art Dudley Stereophile May 2014
The Lehmannaudio Decade brings its “A” game to the analog LP listening experience. It does so without fanfare or the “watch this” level of fireworks that works wonders on a first date but the next morning makes you ask, “What was I thinking?”The last word in phonostages? Not quite. However I am confident that few will find the Decade to be less than excellent when compared with anything else at anywhere near its price. Just like the Black Cube of so many years ago the Decade reminded me all over again of just how musically rewarding it is to be a devotee of vinyl playback. Without reservation, a fine component.by The Absolute Sond Neil Gader   Feb , 2015
LP Magazine - "It is very fast and three-dimensional, delivers an excellent resolution of details while sketching room dimensions deeper than wide. Tonally on the safe side, yes – how ever not just boringly reproducing, but in an absolutely exciting and tingling manner."

At the High End show in Munich 2005, Lehmann audio announced the release of a new phono stage, named Decade, to celebrate the first decade of Black Cube phono stages and to effectively fill the huge gap between the company‘s own Black Cube SE and the Silver Cube reference phono stage. The Decade is the top model of the Black Cube series of phono stages. Audio Section:

The Black Cube Decade clearly has no difficulty in producing a well-detailed and convincingly dynamic sound. It offers a very high standard of finish and features.- HIFI News

"It has a wonderfully spacious sound, and is truly exceptional in this respect at the price, with fine dimensionality, dynamics and a very natural, airy treble." - Hifi World
"If the phono preamplifiers from Lehmann were a football team, the Decade would bear the shirt number ten because it has the overview, can read the game and has the power to decide it on its own." - Image HIFI

Our line of legendary phono stages made in Germany. All of our high-end phono preamplifiers are MM/MC-capable and have a configurable impedance.

Engineered by a musician and manufactured in Germany; Lehmann Audio is one of the world’s best-kept audiophile secrets.
With a precision-engineered range of quality phono stages and headphone amplifiers including digital-USB models, all Lehmann products are designed to reproduce the original sound recording as perfectly as possible.
Reviewed well by the critics, and used by the rest of the industry as reference equipment, Lehmann Audio is a brand everyone interested in high-end sound should look out for.
So it was when f Ortofon USA, wrote to tell me about the Lehmannaudio phono preamplifiers that his company now distributes in the States. I don't recall his precise words, but it was something along the lines of: No tubes, no transformers—and you'll love the stuff anyway.
With that, he sent me a sample of the Lehmannaudio Decade ($2099), a solid-state phono preamplifier from the same German company that made a splash, over 15 years ago, with a phono stage called the Lehmannaudio Black Cube. The Cube received widespread praise for delivering four-figure sound at a three-figure price; the Decade is aimed at a higher niche. Its high level of performance is said to be a result of company founder Norbert Lehmann's expertise with pro audio in general, and microphone stages in particular.
The Decade is supplied in two separate enclosures of identical size—each takes up the same space as a traditional pack of Fig Newtons—and nearly identical appearance: one for the power supply, the other for the preamp proper. The former is well stuffed with a toroidal transformer, a generously sized heatsink, and a healthy brace of reservoir capacitors. Its front panel is as plain as day, yet the power supply's busy rear panel contains an IEC socket, a power switch, and not one but two DC outlets—the second apparently optimized for use with earlier Lehmannaudio preamps.
The preamp itself contains two class-A, zero-feedback gain stages per channel, sandwiched around a passive RIAA equalization stage. The user selects between moving-magnet (36dB) and moving-coil (56dB) ranges with a front-mounted, miniature toggle switch; another toggle, labeled High, adds another 10dB of gain to whichever range is selected, and thus provides up to 66dB for ultra-low-output cartridges. A third toggle activates Lehmannaudio's Soft Rolloff Filter, reducing sub-60Hz output at a rate of 6dB/octave. Ranges of input capacitance and impedance are selected with two banks of DIP switches on the bottom of the preamp—a useful alternative to having to open the case time and again—while two pairs of internal sockets allow the user to select and install his or her own loading resistors (not included).
The Lehmannaudio Decade was the rare component that, on first listen, surprised me—in a good way. Although experience tells me that all MC cartridges perform their best with a step-up transformer as their first gain stage, whenever I review an MC phono preamp, I do at least try one cartridge straight in, without the transformer, on the assumption that that's what the designer had in mind (footnote 1). In this case, I began with my high-output EMT TSD 15 pickup head, and began with side 2 of Dexter Gordon's One Flight Up (Blue Note/Cisco 84176). That was a hell of a starting place: Art Taylor's drumming sounding almost as impactful as with the CineMag Sky 30 from Bob's Devices! Perhaps more important, the Lehmannaudio preamp reproduced the recording with exceptional musical clarity—a quality that was especially notable in the final 16 measures of the main theme of "Coppin' the Haven," which Gordon and trumpeter Donald Byrd play in unison.
The Decade sounded decidedly transformer-like in a variety of other ways. A good, well-selected transformer has a sufficiently fast way with transients that the consequences of groove damage are made less audible, and so it was when I played a very worn original copy of my favorite version of Elgar's Enigma Variations, by Sir John Barbirolli and the Philharmonia Orchestra (EMI ASD 548). The Decade rendered that record every bit as listenable as my combination of Shindo preamplification and Hommage transformer—and still reproduced even the stoutest kettledrum strokes with satisfying force. Instrumental colors and textures, too, were believable: With "Last Train from Poor Valley," from Norman Blake's The Fields of November (Flying Fish 004), the Lehmannaudio got across the weird beauty of Blake's plaintive, understated voice—and his fine old Martin D-18 guitar.
Yes, the Lehmannaudio preamp could be made even more explicitly forceful with the addition of a good transformer. For example, with my Hommage T2 in place, it was easier to hear how Blake intensifies his strumming as a sort of accent at the end of each singing line: a loose-wristed bang in place of a G run. (While using the EMT straight in, I had the Decade's load impedance set for 100 ohms, and its MC and high-gain modes both switched on. Later, when reintroducing the Hommage T2 step-up transformer, I reverted to the 47k ohm load and the MM setting, without extra gain.) Still, one could do quite nicely with just the Decade. Considered on its own, the Lehmannaudio is easily the most impactful solid-state phono preamplifier I've ever experienced—and one of the most believably dynamic phono preamps of any type. A thoroughly impressive product.
Art Dudley Stereophile May 2014 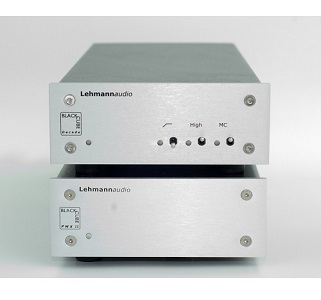