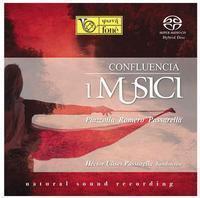 In addition to jazz and classical music a special passion of Fon CEO Giulio Cesare Ricci belongs apparently the Argentine Tango. Some of the best publications of the Italian upper class labels in recent years were the works of Astor Piazzolla, the founder of Tango Nuevo, dedicated. With "Confluencia" reached this series a new and very special highlight.

"Confluence", it could be "Confluencia" roughly translated from Spanish. And what comes together here, which are primarily the musical energies of two congenial partner. On one side is with "I Musici" one of the most prestigious chamber orchestras in Italy. Since its founding in 1951 by students of the famous Academie Nazionale di Santa Cecilia I Musici is in Europe a fixed size. Actually, the twelve musicians specializing in Baroque music, but for "Confluencia" soft harpsichord and basso continuo piano and the weighing step of tango.

On the other side stands with Hector Ulises Passarella a real Tango specialist. Born in 1955 Uruguayan is not only considered one of the world's best bandoneon player (not in vain it is common for respective soundtracks obligation), but also as one of the most important tango composer since Piazzolla.

The first page of "Confluencia" is quite the works Astor Pianolas dedicated. I Musici open the album with his "Canto De Octubre" for string orchestra. And after so could indulge a while in the wonderful sleek and soft string sound, Passarellas bandoneon shall be additional, and opens a completely new world of sound: Vocally, voluminous, dark and woodsy, so, this surprisingly versatile instrument rises above the orchestra of strings and piano in Piazzolla's "Tres Piezas Breves para Orchestra Da Camera". The three-movement work with Prelude, Fugue and Divertimento impressively demonstrates how the Tango Nuevo leaves the ballroom at Piazzolla and conquered the concert hall.

On page two, we experience Passarella as soloist in his own work: His "Suite Rioplatense" is the logical continuation of at Piazzolla chosen path: Modern concert music, but with the unmistakable rhythmic impetus and the emotional gestures of tango.
Finally there will be with his Suite for Strings Aldemaro Romero, one can confidently call themselves the third major Tango Nuevo composers. Again, I Musici again prove that they are more than just a baroque ensemble: Multifaceted, sensitive and energetic they leave the handset in the spirit of tango dancing.

It was recorded all of Giulio Cesare Ricci personally in the Auditorium Seraphicum in Rome with more than proven Neumann tube microphones on pure analog signal path. A photo on the back of the panel shows the microphone placement, which allowed to record an airy and spatial string sound, and at the same create a highly present and detailed bandoneon sound. The sound quality of this LP is just pure Fon, a feast for any audiophiles! And for each Tango Fan anyway! wv Pure analog to March 7, 2015 added by Giulio Cesare Ricci Auditorium Seraphicum in Rome of 4 on a 1/2 inch Ampex ATR 102 tape machine with 76 cm / sec. was also the one-stage average realized purely analog, was pressed in Germany on high quality 180g Virgin vinyl Selections:

The story of fonè
In the context of classical and jazz music market, fonè proposes three decades of recordings using advanced techniques, aimed at the recovery of the original musical atmospheres.
Each new recording is the result of a passionate encounter between art and the art of execution and aims to recreate and reproduce the same spirit with which the works of the past have been performed. One basic feature that makes the difference between fonè and others, is the recording of musical works in natural places and original, constant production that leads to choose from time to time historically more space? Suitable for: church, theater, villa, living room ...
All this is done by retrieving a simple incision that does not do violence to the music: all the equipment is in high definition. Using pairs of valves Neumann microphones in the years 1947 and 1949 (U47, U48 and M49) using techniques very natural timbre bimicrofoniche field effect. These microphones have an important story: they are the microphones used to record the Beatles at Abbey Road Studio and RCA for the "Living Stereo."
No use is made of electronic manipulation of the signal, nor any artificial correction that if they make a sound easier to carve, it is true that distort so unacceptable. With this method you get to transfer the music information on the standard analog for the production of virgin vinyl 180g &  200g
fonè uses for the standard analog Nagra 4S, Studer C37 and J37 and Ampex ATR 102, the standard for digital, in collaboration with Philips the DSD (Direct Stream Digital) technology that has opened the doors to the SACD. For all subsequent stages of processing and control, in which it must be a playback of the sound reproduction systems are used very sophisticated.
After the pressing demands of the enthusiast market and after a long series of investigations to ensure the best possible support, the virgin vinyl 180/200 grams, fonè now makes available its most prestigious titles in the LP format.
strong opposition to current trends in the multinational market, tending to offer a product that is increasingly homogenized and devoid of content.
Implementation is of the highest quality and is dedicated to those who appreciate the pursuit of perfection in the field of sound reproduction, to collectors, to the true connoisseur and expert of things beautiful.
Browse this category: CLASSICAL
Contact information
Piazzolla/Romero/Passarella - I Musici : Confluencia - 180g LP - SCOTT NANGLE AUDIO
T&C's and Privacy Policy