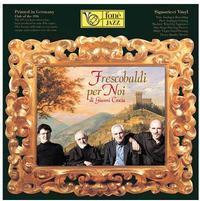 Frescobaldi for Us ", the new record creation of Gianni Coscia. It 'an unusual reinterpretation of the compositions of the musician Girolamo Frescobaldi of Ferrara, a reconstruction that combines the Renaissance atmosphere, underlined by the presence of the brass trumpet and trombone, to unscrupulous jazzy improvisations with original themes of Coscia. The real peculiarity of the proposal is that the counterpoint starting material is not absolutely altered, but is repeated with the only variant that is the timbre due to the presence of the establishment instruments proposed by Coscia (accordion, trumpet, trombone and contrabass ).

This then becomes inspirational material for improvisations and creations of new stilisicamente varied themes which often become evocations of film images. The staff, though unusual, is compact and well suited for the purpose, enriched by the experience of musicians that do not need presentation. Fulvio Sigurtà, young trumpet player of great flexibility and sensitivity, seamlessly blends the ensemble of musicians who in the past have more than once collaborated with each other; Enzo and Dino Piana are Pietropaoli. Also crucial in the realization of the project is the now fifteen-year collaboration between Francesco Ciarfuglia, founder of Giottomusic, and Gianni Coscia. Ciarfuglia has recorded and produced much of the leg projects, both record both in the production of film soundtracks. Collaborating since 1993 and "Frescobaldi for Us" must be considered the culmination of a long artistic experience and record lived together.

The story of fonè
In the context of classical and jazz music market, fonè proposes three decades of recordings using advanced techniques, aimed at the recovery of the original musical atmospheres.
Each new recording is the result of a passionate encounter between art and the art of execution and aims to recreate and reproduce the same spirit with which the works of the past have been performed. One basic feature that makes the difference between fonè and others, is the recording of musical works in natural places and original, constant production that leads to choose from time to time historically more space? Suitable for: church, theater, villa, living room ...
All this is done by retrieving a simple incision that does not do violence to the music: all the equipment is in high definition. Using pairs of valves Neumann microphones in the years 1947 and 1949 (U47, U48 and M49) using techniques very natural timbre bimicrofoniche field effect. These microphones have an important story: they are the microphones used to record the Beatles at Abbey Road Studio and RCA for the "Living Stereo."
No use is made of electronic manipulation of the signal, nor any artificial correction that if they make a sound easier to carve, it is true that distort so unacceptable. With this method you get to transfer the music information on the standard analog for the production of virgin vinyl 180g &  200g
fonè uses for the standard analog Nagra 4S, Studer C37 and J37 and Ampex ATR 102, the standard for digital, in collaboration with Philips the DSD (Direct Stream Digital) technology that has opened the doors to the SACD. For all subsequent stages of processing and control, in which it must be a playback of the sound reproduction systems are used very sophisticated.
After the pressing demands of the enthusiast market and after a long series of investigations to ensure the best possible support, the virgin vinyl 180/200 grams, fonè now makes available its most prestigious titles in the LP format.
strong opposition to current trends in the multinational market, tending to offer a product that is increasingly homogenized and devoid of content.
Implementation is of the highest quality and is dedicated to those who appreciate the pursuit of perfection in the field of sound reproduction, to collectors, to the true connoisseur and expert of things beautiful.
Browse this category: JAZZ
Contact information
Di Gianni Coscia - Frescobaldi Per Noi - 180g LP - SCOTT NANGLE AUDIO
T&C's and Privacy Policy