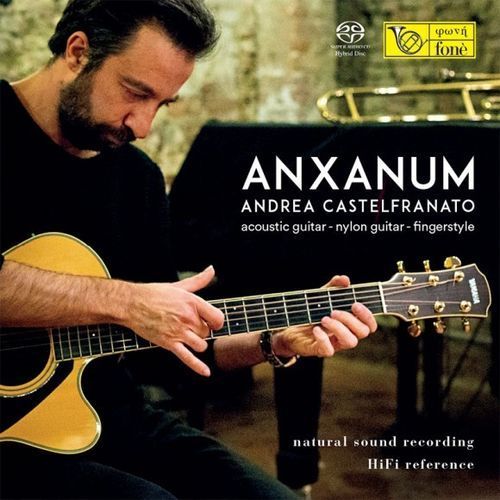 This album contains some original songs composed by Andrea Castelfranato and some songs inspired by famous pieces by Sting, Pino Daniele, John Lennon and Paul McCartney and others.
This recording has been made in the ancient cellar of the Palazzo di Scoto di Semifonte in Certaldo Alto (FI) in which the acoustics is very extraordinary.
Giulio Cesare Ricci used the microphones of his Neumann collection. As with all foné albums, this album also has a double master: analogue for the Vinyl (AMPEX ATR 102 30ips 2 tracks 1 / 2inch)  No editing. All tracks on this record are heard as they were performed.
An album that will surely become a reference for audiophile recording lovers.
• 180g Virgin Vinyl
• Limited Edition
• Pure Analogue Recording & Cutting
• Cutting Machine wired by Signoricci
• One-Stage Pressing Process
• Heavy Quality Sleeves
• Signoricci Vinyl Printed in Germany
• Produced in only 496 copies
1. Louisiana Blues
2. Kiitos
3. I Remember You
4. Get Back
5. Isole
6. Sweet Little Town
7. Memories
8. Fields of Gold
9. Mediterranean
10. Guarda Che Luna
11. Quando
12. Vola Vola
13. Aria di te Fausto
The story of fonè
In the context of classical and jazz music market, fonè proposes three decades of recordings using advanced techniques, aimed at the recovery of the original musical atmospheres.
Each new recording is the result of a passionate encounter between art and the art of execution and aims to recreate and reproduce the same spirit with which the works of the past have been performed. One basic feature that makes the difference between fonè and others, is the recording of musical works in natural places and original, constant production that leads to choose from time to time historically more space? Suitable for: church, theater, villa, living room ...
All this is done by retrieving a simple incision that does not do violence to the music: all the equipment is in high definition. Using pairs of valves Neumann microphones in the years 1947 and 1949 (U47, U48 and M49) using techniques very natural timbre bimicrofoniche field effect. These microphones have an important story: they are the microphones used to record the Beatles at Abbey Road Studio and RCA for the "Living Stereo."
No use is made of electronic manipulation of the signal, nor any artificial correction that if they make a sound easier to carve, it is true that distort so unacceptable. With this method you get to transfer the music information on the standard analog for the production of virgin vinyl 180g &  200g
fonè uses for the standard analog Nagra 4S, Studer C37 and J37 and Ampex ATR 102, the standard for digital, in collaboration with Philips the DSD (Direct Stream Digital) technology that has opened the doors to the SACD. For all subsequent stages of processing and control, in which it must be a playback of the sound reproduction systems are used very sophisticated.
After the pressing demands of the enthusiast market and after a long series of investigations to ensure the best possible support, the virgin vinyl 180/200 grams, fonè now makes available its most prestigious titles in the LP format.
strong opposition to current trends in the multinational market, tending to offer a product that is increasingly homogenized and devoid of content.
Implementation is of the highest quality and is dedicated to those who appreciate the pursuit of perfection in the field of sound reproduction, to collectors, to the true connoisseur and expert of things beautiful.
Browse this category: ROCK & POPULAR
Contact information
Andrea Castelfranato - Anxanum - 180g LP - SCOTT NANGLE AUDIO
T&C's and Privacy Policy