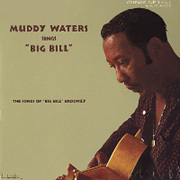 Just got this album its the Speakers corner version and boy it sure does sound good, won't be coming of my turntable for a good while. LP Review

In 1960, when Muddy Waters recorded this album as a tribute to Big Bill Broonzy two years after Broonzy's death, he could be sure of Broonzy's approval. "Oh yeah, Muddy is a real singer for the Blues," Big Bill, the Mississippi foundation stone, was heard to say early on in Muddy Waters' career.

Full of confidence after a Best Of compilation released on the Chess label in 1959 and his legendary appearance at the Newport Folk Festival, Muddy set down his own Broonzy songs. It goes almost without saying that such successful numbers as "I Feel So Good" and "Tell Me Baby" are overflowing with a Chicago feeling that gets right under your skin.

Waters's tribute album to the man who gave him his start on the Chicago circuit, this stuff doesn't sound much like Broonzy so much as a virtual recasting of his songs into Muddy's electric Chicago style. Evidently the first time Waters and his band were recorded in stereo, the highlights include high voltage takes on "When I Get to Drinkin'" and "The Mopper's Blues," with some really great harp from James Cotton as an added bonus.

One of the leading figures in the post war Chicago Blues scene is Muddy Waters. Alongside Howlin’ Wolf and Little Walter, Muddy was a big man of the Blues. His music needs no introduction and his influence is still visible today. But this master once showed his respect to another Chicago Bluesman. It was in In 1960, when Muddy Waters recorded an album as a tribute to Big Bill Broonzy ‘Muddy Waters sings Big Bill’.

Big Bill Broonzy died two years earlier, but Muddy could be sure of Broonzy’s approval All Music writes: “Oh yeah, Muddy is a real singer for the Blues,” Big Bill, the Mississippi foundation stone, was heard to say early on in Muddy Waters’ career. The confident Muddy – who was already one of the kings of the blues – changed Big Bill’s repertoire into a Muddy Waters cocktail.

3. When I Get to Thinking 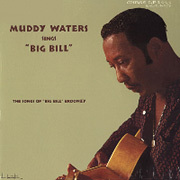