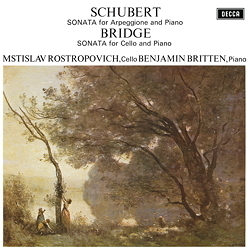 Few people will be able to resist the big climax when bowed with the intensity Rostropovich brings to it (the Bridge) here... It is supremely beautiful playing from both cellist and pianist (in the Schubert), with never a dead note in even the most incidental bit of figuration, and I suppose we really ought to be grateful that such a humble (albeit charming) little work comes in for so much love. The engineering is superb: the sound is glorious, and so true to life that if you shut your eyes you can imagine the players in your own room.— Gramophone