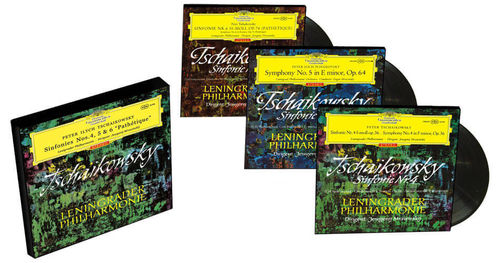 In September 1960, at the climax of the cold war, the Leningrad Philharmonic visited the United Kingdom under their legendary chief, Yevgeny Mrawinskij, giving sensational concerts in Edinburgh and London, which produced ecstatic reactions from both the press and the public. Since this virtuoso orchestra was scarcely represented at that time in Western catalogs, the sound engineers of the Deutsche Grammophon cleverly took the opportunity to capture their skills in much better sound quality than was possible at the time by their Soviet colleagues. Among the most notable recordings recorded at Wembley Town Hall were Mrawinski's blazingly urgent interpretation of Tchaikovsky's Fourth Symphony. Always a perfectionist, the conductor was so delighted with the quality of this recording that he and his orchestra were willing to record with the DG the last two symphonies, two months later, this time in the Vienna Musikverein.

"‘Incendiary’ is just the right word – this is a recording that catches fire so early in the first movement, I’m gripped each time I listen. I enjoy the stereo sound picture, which spotlights the utterly distinctive Soviet-Russian quality of the Leningrad Philharmonie the frenetic energy and snarling hysteria that Mravinsky draws from his players are still capable of shredding nerves. The Pathétique contains deeply personal, deeply troubling music; this DG recording may prove too theatrical for some, but it gnaws away at my soul like no other." – Mark Pullinger, Gramophone

"At the height of the Cold War, the Leningrad Philharmonic Orchestra under its legendary principal conductor Evgeny Mravinsky visited Britain in September 1960, giving sensational concerts in Edinburgh and London which drew ecstatic responses from both press and public. Since this virtuoso orchestra was then poorly represented in Western record catalogues, Deutsche Grammophon’s engineers astutely seized the opportunity to capture their playing in far superior sound to anything that could be produced by their Soviet counterparts. Among the most notable sessions taped in Wembley Town Hall was Mravinsky’s blazingly urgent account of Tchaikovsky’s Fourth Symphony. Ever the perfectionist, the conductor was so pleased with the quality of this recording that two months later he and the orchestra agreed to record the last two symphonies for DG, this time in Vienna’s Musikverein. Initially released on three separate stereo LPs, these Tchaikovsky performances convey a highly-strung raw energy that remains undimmed up to the present day. The Finale of No. 5, delivered at a manically swift pace, is one of high points, guaranteed to take your breath away." - BBC Music Magazine 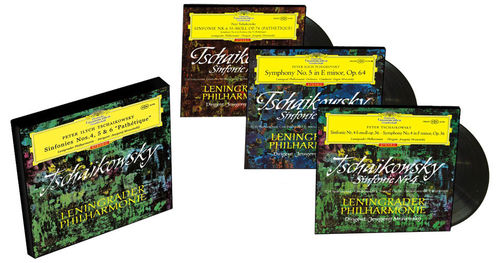