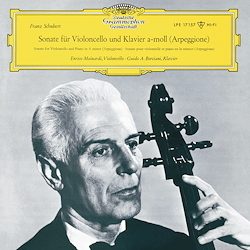 One of the greatest cellists of the 20th century, Enrico Mainardi’s Arpeggione Sonata by Franz Schubert, accompanied by Guido Borciani on Deutsche Grammophon, is reissued. In this legendary recording, Mainardi balances between rigorous and serious interpretation, and romantic expression, with a distinctive tone reminiscent of viola, fast vibrato and accurate intonation. Mainardi has other recordings of Schubert’s Arpeggione Sonata, including the Salzburg live performance in 1959, but this recording illustrates his musical truthfulness with his mission “My principle and aim is to be at the service of music and not to use it for the sake of showing myself.”

"Mainardi plays with his accustomed refinement and elegance, and fine-drawn, aristocratic tone, and there is much pleasure to be got from his “musing”, dreamy phrasing of several passages, particularly in the first movement." - Gramophone