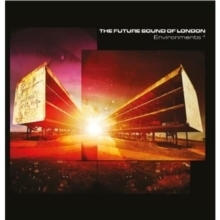 Environments 4 is another of the great lost albums by The Future Sound of London. These sessions have taken on an almost mythical status with the group s fan base, but the difference is the group have been back in the studio adding new ideas to older recordings and Murmurations is a brand new track. This release also comes after the recent success of the first three installments which have sold 1000s of units across the different volumes and still climbing.

To re-cap, Brian Dougans and Garry Cobain began their musical partnership and friendship in Manchester, England in the mid 1980s whilst the two were studying at Manchester University. Dougans had already been making electronic music for some time when they first began working in various local clubs. In 1988, Brian embarked on a project for the Stakker graphics company and the result was Stakker Humanoid. In the following three years the pair produced music under a variety of aliases, followed by the breakthrough aforementioned classic ambient dub track Papua New Guinea in 1992, which was also the first release under the Future Sound of London moniker.