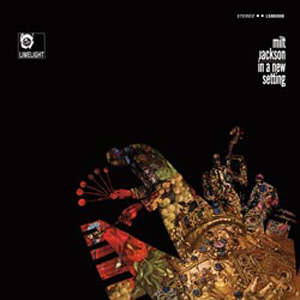 The vibraphonist presents himself in a new setting in this recording from 1964. Clearly Milt Jackson wanted to free himself occasionally from the straightjacket of the Modern Jazz Quartet. "Sonny's Blues" is proof of this: it is percussive and swinging, and without the eagle eyes of John Lewis in the background. This time the young McCoy Tyner, who had worked with John Coltrane ("A Love Supreme" was recorded in the same month), was at the piano. Jimmy Heath, responsible for the drive not only as a composer but also as instrumentalist, and Bob Cranshaw on the bass, contribute important impetus to the short blues, ballad-like and bop themes. None of the twelve numbers became a real jazz hit, but each has kept its own individual charm to this day. If you set value on an excellent product being excellently packaged then you are well advised to purchase this LP. Unlike the CD version in its jewel case, this album is now being re-released with its original gatefold cover from the truly beautiful Limelight series, for which the designer alone should have received a Grammy.

I'll never forget the first time I heard well-recorded vibes on an audio system. It was at an E.J. Korvette's in Douglaston, NY on a pair of their XAM "house brand" speakers playing in the store's record department. I bought a lot of records there. The album was Terry Gibbs Quartet's That Swing Thing (Verve V6-8447) recorded live at Shelley's Mannehole in Los Angeles.

The shimmering, bell-toned vibe sound mesmerized even in the crowded department store and though I was there to buy a rock record (I didn't know what, but since I'd needed a ride from my mommy to get there I was not going home empty handed!), I had to have that record and still do. The engineering credit on the jacket was for a Wally Hider (sic), which at the time didn't mean a thing to me but when I got home and played the record, it did.

That 1961 record led me to The Modern Jazz Quartet and of course to Milt Jackson. This Limelight release from 1964 finds Jackson as the leader, freed from the group's "button down" sound and he makes the most of it on a set of short swinging tunes backed by tenor saxist Jimmy Heath (brother of MJQ bassist Percy Heath and still going strong at 86), impeccable MJQ drummer Connie Kay, bassist Bob Cranshaw (long associated with Sonny Rollins) and McCoy Tyner who recorded with Coltrane A Love Supreme the same month as this session. Here he's funky and swinging. You'll hear few if any block chord vamps. His right hand almost gets Monk-ish.

The eleven tunes are all short—around 3 minutes long—leading some to speculate they were intended for airplay and possible hit status but there's nothing musically to indicate the aim was truly commercial and this album, with its colorful, ornate die-cut inner gatefold booklet fairly quickly went out of print and was not issued on CD until the late '90's. The tunes are funky and bluesy, with a few rest stops for gorgeous ballads like Jackson's "Lazy Melody". Heath taking some boppish blasts and Tyner answers in kind but mostly it just swings tunefully on a set of outstanding originals by Jackson and Heath, with one by Tyner and few standards.

The sound is positively stupendous in a mid-sixties stereo way. With piano and sax hard left, drums and bass hard right and Jackson's shimmering vibes dead center and just about in your lap three-dimensional.Tonally and dimensionally it doesn't get much better. Who engineered and where we don't know other than probably in New York City somewhere (Nola's Penthouse?). It doesn't really matter. The sound is superb.This reissue from Speakers Corner goes the full mile, resurrecting the full-color glossy stock die-cut gatefold notes and credits and the record was mastered at Sterling Sound by Ryan K. Smith and if you're not convinced by his stupendous cut of Graceland, among other reissues, that this youngster is an incredibly talented mastering engineer (he learned from George Marino—one of the best), you will after giving this record a spin. Add a pristine Pallas pressing and you have a great reissue of a difficult to find record.