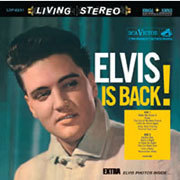 "…While the opener, 'Make Me Know It,' may have you thinking you've bought a teen album, Presley's steamy take on 'Fever' will change your mind. This track alone makes the album worth having, and of course Bill Porter's recording is as good as anything you'll ever hear on your system. You can hear Elvis's jewelry rattle!" Music = 10/11, Sound = 9/11 – Michael Fremer,

Elvis’s first post-Army album created a sensation when it was released just one month after he entered Nashville Studio B on March 20th, 1960, two week after his release from the Army. Unfortunately, for Presley and RCA Elvis Is Back! wasn’t a big seller because it didn’t contain any hits. Presley had been away for two years.

Yet the album, recorded over the course of two nights (along with six more omitted tracks including big hits like “Stuck On You,””Fame and Fortune,” and “It’s Now or Never”), has stood up remarkably well, in part because of the hurried “live take” excitement and of course, the caviar of Nashville studio musicians working under pressure and delivering. You’ve got Hank Garland and Scotty Moore, Floyd Cramer, Bob Moore, “Boots” Randolph and The Jordanaires!

While the opener, “Make Me Know It,” may have you thinking you’ve bought a teen album, Presley’s steamy take on “Fever” will change your mind. This track alone makes the album worth having, and of course Bill Porter’s recording is as good as anything you’ll ever hear on your system. You can hear Elvis’s jewelry rattle!

As for the rest, the musicianship is superb, Elvis is in great form, and the music will sound as dated as a 1958 Chevy Impala looks and handles, but you can’t beat those lines!

Elvis and the producer save the best for last. Elvis’s swaggering, gin-soaked take on Lowell Fulsom’s “Reconsider Baby,” with both Buddy Harman and D.J. Fontana drumming, and I think his acoustic guitar, propel Elvis from teen idol to adult icon.

Sonically, this is a Bill Porter wide screen beauty laid out cleanly in three dimensions. For those who missed the Kevin Gray/Steve Hoffman DCC Compact Classic 180g edition from 1997 (LPZ-2037), here’s your chance to get it. When I took a good look at the “dead wax,” along with the familiar Gray/Hoffman mastering scribe, I found “LPZ-2037” crossed out, meaning either the original metal parts were used to generate stampers, or they decided to play a little joke.

Of course I compared the DCC Compact Classic and this issue, and not surprisingly they don’t sound identical since, I assume, Pallas probably pressed this issue in Germany. However, the two LPs sound so close they might as well have been pressed in the same plant.

I’m glad Elvis is Back! is back. Don’t miss it this time around.

Elvis Is Back, the first ever stereo album recording from the King, was cut and released within weeks of his discharge from the army, in 1960.

Filled with classic R & B and rock standards, Elvis Is Back rode the Billboard album charts for more than a year - peaking at #2.

Although they have common recording origins, two of the three singles, "It's Now or Never" and "Are You Lonesome Tonight," were very quirky by the standards of Elvis  songs at the time -- the former inspired by Elvis admiration for  1949 hit "There's No Tomorrow," while the latter was recorded at the request of Col Parker  as a favor to his wife.

They add to the diversity of sounds on this record, which shows a mature Elvis . "Dirty, Dirty Feeling" and "It Feels So Right" showed he could still rock out and challenge authority and propriety, while "Reconsider Baby" and "Like a Baby" offer some of his best blues performances; but "The Thrill of Your Love" (a very gospel-tinged number), "Soldier Boy,"

"Girl of My Best Friend," and "Girl Next Door Went a' Walking," also displayed the rich, deep vocalizing that would challenge critics' expectations of Elvis  playing rhythm guitar throughout. He also comes off better than on any of his other albums since arriving at RCA, as a musician as much as a "star" (he'd always had a lot more to say about running his sessions than the critics who loathed his RCA years indicated.

this classic album features the complete contents of the March 20, 1960, RCA Hollywood session plus the dawn-to-dusk April 2 Nashville session that rounded out the album, for a total of 18 songs, including the three singles and their B-sides from those sessions. The sound is extraordinarily close yet natural, giving the listener full value for the presence

3. The Girl of My Best Friend

6. Thrill of Your Love

9. It Feels So Right 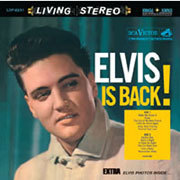 This Speakers Corner LP was remastered using pure analogue components only, from the master tapes through to the cutting head 25 Years pure Analogue
Are your records completely analogue?
Yes! This we guarantee!
As a matter of principle, only analogue masters are used, and the necessary cutting delay is also analogue. All our cutting engineers use only Neumann cutting consoles, and these too are analogue. The only exception is where a recording has been made – either partly or entirely – using digital technology, but we do not have such items in our catalogue at the present time
Are your records cut from the original masters?
In our re-releases it is our aim to faithfully reproduce the original intentions of the musicians and recording engineers which, however, could not be realised at the time due to technical limitations. Faithfulness to the original is our top priority, not the interpretation of the original: there is no such thing as a “Speakers Corner Sound”. Naturally, the best results are obtained when the original master is used. Therefore we always try to locate these and use them for cutting. Should this not be possible, – because the original tape is defective or has disappeared, for example – we do accept a first-generation copy. But this remains an absolute exception for us.
Who cuts the records?
In order to obtain the most faithful reproduction of the original, we have the lacquers cut on the spot, by engineers who, on the whole, have been dealing with such tapes for many years. Some are even cut by the very same engineer who cut the original lacquers of the first release. Over the years the following engineers have been and still are working for us: Tony Hawkins, Willem Makkee, Kevin Gray, Maarten de Boer, Scott Hull, and Ray Staff, to name but a few.
At the beginning of the ‘90s, in the early days of audiophile vinyl re-releases, the reissue policy was fairly straightforward. Companies such as DCC Compact Classics, Mobile Fidelity, Classic Records and others, including of course Speakers Corner, all maintained a mutual, unwritten code of ethics: we would manufacture records sourced only from analogue tapes.
Vinyl’s newfound popularity has led many other companies to jump on the bandwagon in the hope of securing a corner of the market. Very often they are not so ethical and use every imaginable source from which to master: CDs, LPs, digital files and even MP3s.
Even some who do use an analogue tape source employ a digital delay line, a misguided ’80s and ‘90s digital technology that replaces the analogue preview head originally used to “tell” the cutter head in advance what was about to happen musically, so it could adjust the groove “pitch” (the distance between the grooves) to make room for wide dynamic swings and large low frequency excursions. Over time analogue preview heads became more rare and thus expensive.
So while the low bit rate (less resolution than a 16 bit CD) digital delay line is less expensive and easier to use than an analogue “preview head”, its use, ironically, results in lacquers cut from the low bit rate digital signal instead of from the analogue source!
Speakers Corner wishes to make clear that it produces lacquers using only original master tapes and an entirely analogue cutting system. New metal stampers used to press records are produced from that lacquer. The only exceptions are when existing metal parts are superior to new ones that might be cut, which includes our release of “Elvis is Back”, which was cut by Stan Ricker or several titles from our Philips Classics series, where were cut in the 1990s using original master tapes by Willem Makkee at the Emil Berliner Studios. In those cases we used only the original “mother” to produce new stampers.
In addition, we admit to having one digital recording in our catalogue: Alan Parsons’ “Eye in the Sky”, which was recorded digitally but mixed to analogue tape that we used to cut lacquers.
In closing, we want to insure our loyal customers that, with but a few exceptions as noted, our releases are “AAA”— analogue tape, an all analogue cutting system, and newly cut lacquers.