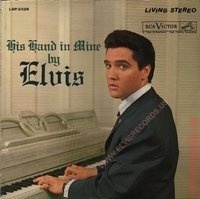 Elvis, like his fellow Sun Records veteran Johnny Cash, had a deep and abiding religious commitment (which did not get in the way of their earthly pleasures!) and love of gospel music. Each of them released religious records interspersed with their more popular fare. This was the first of Elvis’ three gospel records, released in 1960 as his sixth LP. Some of Elvis’ songs were originally intended as songs of religious praise, but the words worked equally well as love songs. Two such numbers from this session (‘Surrender’ and ‘Crying In The Chapel’) were held back and hit big as chart singles. The record charted well and eventually went platinum. And with good reason. Scotty Moore on guitar, Hank Garland on guitar, Floyd Cramer on piano and Elvis at his prime add up to outstanding music, and Elvis was one of the greatest gospel singers, channeling the same energy that sent teen girls swooning into religious music.

Whatever you think of the  content, this is among Elvis’ greatest efforts and one of his best-recorded LPs. Presley’s Nashville recordings for RCA of this period stand as some of the best popular recordings ever made, and Speakers Corner’s Willem Makkee has succeeded in delivering all the freshness of the original.  Dennis Davis HI-FI + Sound 9/10 Music 9/10

Almost everyone loves gospel songs. After all – it is inspirational music about good news and hope and warms the heart without demanding religious belief. But what in God’s name makes these songs so enjoyable? Why are they music to one’s ears? Is it because of the simple yet unique melodies, the soft or rocking grooves, or the prayer wheel-like verses that are sung alternately by a soloist and chorus? Elvis fans might well be able to answer this question just by taking a quick look at the cover, while other more undiscerning lovers of black folk spirituality would say that this is a well-produced, professional album that cannot be equalled.

Elvis lets his young, flexible voice swing sonorously here, lightly and airily there, all the while supported by a top-notch vocal backing group. The rich vocal harmonies are sung with true passion, and it is certainly no coincidence that one is reminded of the sound of the Golden Gate Quartet. In one moment the voices soar to celestial heights, in another they plunge down to a deep rumbling bass, not to forget the soft and springy rhythm section. his LP isn’t just one of Elvis’ best LPs, it’s one of the best (and best-recorded) gospel sessions of all time.

Musicians:
Elvis Presley
The Jordanaires
Selections:
Side One:
1. His Hand In Mine
2. I'm Gonna Walk Dem Golden Stairs
3. In My Father's House
4. Milky White Way
5. Known Only To Him
6. I Believe In the Man In the Sky
Side Two:
7. Joshua Fit the Battle
8. Jesus Knows What I Need
9. Swing Down Sweet Chariot
10. Mansion Over the HIlltop
11. If We Never Meet Again
12. Working On the Building
Recording: October 1960 at RCA Studio B in Nashville, Tennessee
Production: Steve Sholes 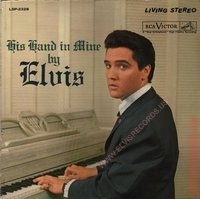