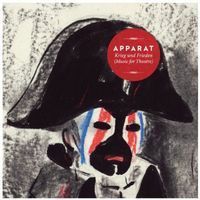 2013 release from Apparat (AKA Sascha Ring), an album of music based on Sebastian Hartmann's theater production of Tolstoy's War & Peace. Sebastian Hartmann is considered one of the big innovators of contemporary German theatre, and asked Ring to contribute to this mammoth project, which was commissioned by the renowned German arts festival Ruhrfestspiele in Recklinghausen.

Sascha Ring aka Apparat provides the  music for his theatrical adaptation of War and Peace.

For four weeks, ring  and a 30-piece group of instrumentalists, including close associates  created the material and rehearsed in an abandoned factory building. Up to the conclusion of the production, there was no intent to release the music in any form,  opted to shape the performances into an  album.

It flows like one, beginning with a short intro of strings that morphs into threatening drones before switching between a succession of predominantly subdued instrumentals and more involved (i.e., musical) pieces with additional percussion. With the exception of "LightOn, prickly textures and crunchy beats are absent; most of the program certainly could be re-purposed as a film score.

Even though the music apparently went through a significant studio process, it's difficult to shake the feeling that it would be preferable to hear the original compositions while witnessing the production. The two full-blown songs featuring vocals -- emotive and pained in a fashion that's very adult contemporary indie -- don't seem to bear the weight of the work that inspired its making.

Regardless, this is a sporadically thrilling and fascinating part of the apparat  discography.